A question of supplies 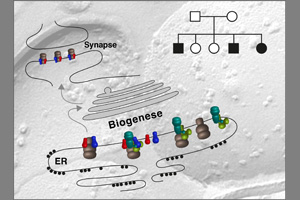 Schematic illustration of AMPA receptor biogenesis in the endoplasmic reticulum (ER) with subsequent delivery to the synaptic compartment. Upper right: pedigree of one of the discovered FRRS1I families. Graphics: Bernd Fakler

For the first time, Dr. Aline Brechet, Dr. Jochen Schwenk and Prof. Dr. Bernd Fakler, together with geneticists from the University of Leipzig and Paris, France, uncovered the significance of the molecular assembly processes – called biogenesis – of AMPA-type glutamate receptors for proper operation of the human brain.

AMPA receptors, the most abundant neurotransmitter receptors in the brain, are multi-protein complexes that are assembled intracellularly and are subsequently transported to the synapses where they are responsible for signal transduction and information processing. Defective receptor assembly resulting from genetic mutations causes severe intellectual disability with cognitive impairment and epileptic activity.

The results introduce an unexpected mechanism for the control of higher brain functions in humans. The biologists and geneticists recently published their findings in the online-journal Nature Communications.

Using high-resolution proteomic analysis, the scientists identified a population of AMPA receptors in brain membrane preparations that fundamentally differs in their subunit composition from synaptic AMPA receptors. These newly identified complexes are restricted to the endoplasmic reticulum and represent a transitional step in the biogenesis of synaptic receptor complexes.

When formation of these transitional complexes is inhibited via virus administered to rodent brain, the number of synaptic AMPA receptors is drastically reduced. As a result, the researchers detected a largely disturbed synaptic signal transduction.

In the human brain, impairment of AMPA receptor biogenesis may be invoked by mutations in the main subunit of the transitional complexes, the so-called FRRS1I protein. The researchers identified there different FRRS1l mutations in three distinct families where homozygously affected patients (mutations in both, maternal and paternal alleles) suffered from severe brain dysfunction: all patients demonstrated largely impaired intellectual abilities, delayed or complete lack of speech development and epileptic activity.

Interestingly, the diseased brains failed to show any significant alterations in morphology. For the scientists, these observations are indicative for functional deficiencies induced by the impaired AMPA receptor biogenesis as the disease-causing mechanism.

As early as 2012 Fakler’s group has shown that AMPA receptors in the brains are assembled from an array of more than 30 different proteins. Quite a number of these proteins – including the FRRS1I protein – lack annotation of primary function(s). With their current work, the scientists have shown how important these ‘unknown’ protein components and research pursuing their molecular mode of action are for understanding higher brain functions.

The physiologists Jochen Schwenk and Bernd Fakler along with the neurobiologist Aline Brechet conduct research at the Institute of Physiology. Schwenk and Fakler also work at the Cluster of Excellence BIOSS Centre for Biological Signalling Studies at the University of Freiburg.