A periodic table of molecular knots 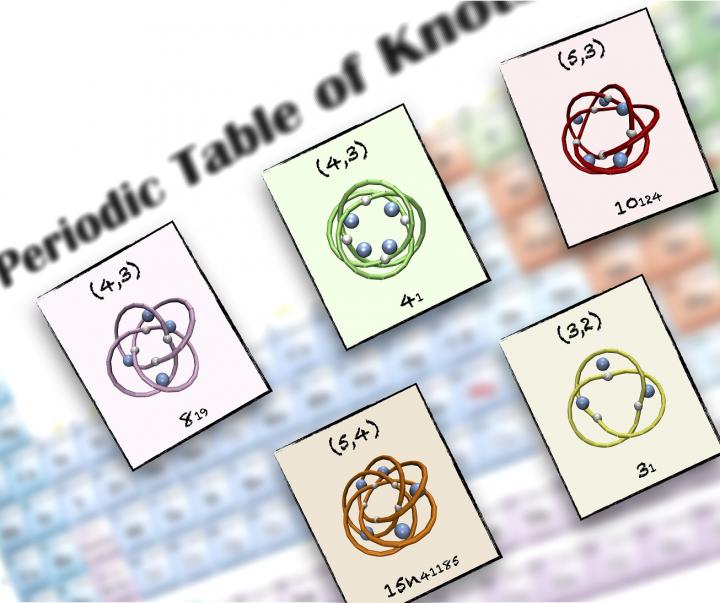 Which new knot types will it be possible to realise in the future? This is the challenging question that SISSA scientists, in association with the University of Padua, have tackled using computer simulations in this new work published in Nature Communications. Credit: Mattia Marenda and Cristian Micheletti Usage Restrictions: The image can be only used in connection with this research

Consider a short piece of rope: could you guess which knots are more likely to form if you crumple and shake it? Synthetic chemists have long been working on a molecular version of this problem and, so far, have succeeded at synthesizing half a dozen different knots types using molecular self-assembling techniques. But which other knot types will it be possible to realise in the future?

This is the challenging question that SISSA scientists, in association with the University of Padua, have tackled using computer simulations in this new work published in Nature Communications. The scientists identified a shortlist, a kind of “periodic table”, of the most designable knot types, i.e. those knots that could easily self-assemble under appropriate physical and chemical conditions.

The findings, obtained with computational predictive models, are supported by the latest experimental results and ought to aid the synthesis of as yet undiscovered topologies. This study, and the increasingly predictive capability of molecular modelling techniques, can create novel possible perspectives for future advanced applications, like the construction of sophisticated molecular machines for loading and delivering a nanocargo.

Not just an intellectual challenge

“There is a growing scientific interest in molecules with complex. In this context, the possibility to design and synthesis of novel types of molecular knots is particularly appealing.” say Mattia Marenda and Cristian Micheletti, respectively first and last author of this research.

“Until recently, only few types of molecular knots had been synthesised. These were the simplest knots in mathematic tables, i.e. those having at most 5 essential crossings”. One could have thus predicted that the next knot type to be synthesized would have had six crossings.

However, in a computational study of 2015, Micheletti and collaborators argued that the simplest and most designable undiscovered knot type was significantly more complex and featured as many as 8 essential crossings. This prediction was experimentally confirmed in 2017 and motivated the current study, which employed a more systematic exploration of the shapes or configurations that can be formed from identical building blocks stitched together in a string-like fashion.

“With these models, we aimed at discovering which new molecular knots types, if any, would be easiest to obtain with current synthetic chemistry techniques, particularly self-assembly. We found that these privileged knot types do exist, but are very rare. Only a dozen of different topologies are realisable among millions of simple knot types. The results of our models had an inherent simplicity” says Marenda.

“The molecular weaving of these knot types is modular and highly symmetric. We used these features as selection criteria to sift the huge combinatorial space of molecular weaving patterns and obtained a shortlist of knot types expected to be easily assembled from few identical building blocks”.

“The shortlist is similar to a periodic table, in that it is organised in rows and columns which reflect different aspects of the expected difficulty of practical realization”, continues Micheletti. “The results are supported by recent experiments and this suggests that the table could indeed be useful to experimental chemists for choosing the target topologies for further studies and applications”.

What are possible long-term results of this research? “At this time” explain Marenda and Micheletti “chemists and physicists have mostly focussed on proof-of-concept demonstrations of the design and synthesis of molecular knots. Nonetheless, interesting applicative avenues have already been suggested”. A chief example is the assembly of molecular cages:

“In this case, specific substances could be nested or trapped within weavings of synthetic molecular knots. The latter could then serve as a controllable molecular machine, capable of loading or releasing a nanocargo depending on the specific physico-chemical conditions. These are interesting and appealing perspectives for possible applications in medicine or electronics”.