A novel antibiotic from weeds 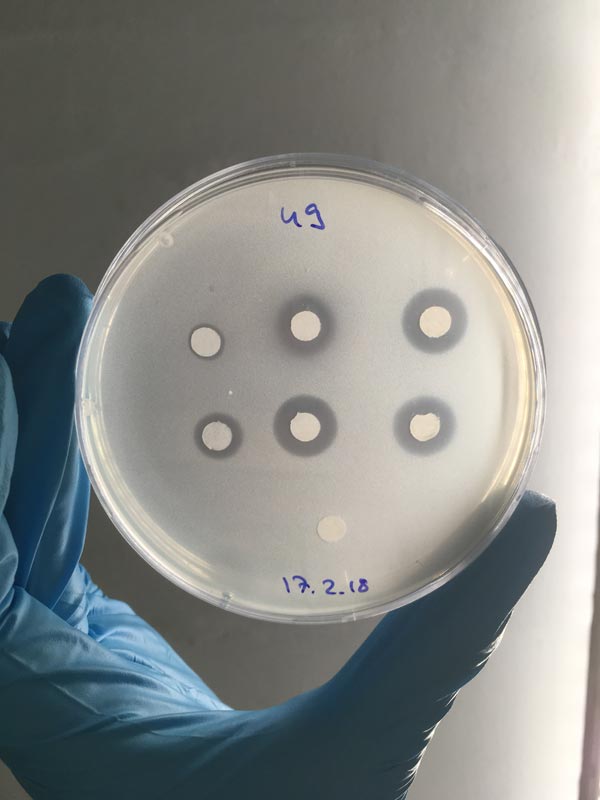 Zones of inhibition in a bacterial lawn caused by antibiotics

Many of the antibiotics used today were developed from natural products made by bacteria themselves in order to ward off other bacteria. These products used to be sought and found primarily in soil. Now, Julia Vorholt and Jörn Piel of the Institute of Microbiology at ETH Zurich have turned to a totally different ecosystem: the leaves of plants.

As part of the National Research Programme “Antimicrobial Resistance” (NRP 72) funded by the Swiss National Science Foundation (SNSF), the researchers are investigating bacterial strains from the leaf surface of Arabidopsis thaliana, or thale cress, which grows in the wild.

This microcosm, known as the phyllosphere, is poor in nutrients. “That gives rise to intense competitive pressure,” says Julia Vorholt. “As a result, bacteria produce a diversity of substances that allow them to defend their habitat.” That's because despite the scarce food supply, the phyllosphere is populated by a large number of organisms. Vorholt and Piel investigated more than 200 bacterial strains that occur in the widespread thale cresses.

The genomes of the strains have been decoded, but have hardly been analysed in any targeted way until now. “We applied bioinformatics techniques to investigate gene clusters that are able to control the production of substances and could thus have an effect on other bacteria”, says Vorholt. To find out exactly what those effects are, the researchers ran parallel tests in the laboratory: they found 725 antibiotic interactions between various strains that prevent some of the bacteria from multiplying.

“The big question was obviously whether we had simply found natural products that are known from other habitats, or whether we had stumbled onto compounds with totally new characteristics,” says Jörn Piel. This has important implications for antibiotic research, which is seeking new antibiotics with mechanisms of action that are very different from those of today's drugs and thus could overcome existing antibiotic resistance.

A totally new compound – probably one of many

To determine whether they were dealing with new antibiotics, Vorholt and Piel had to study the chemical compositions in detail. They did this for gene clusters and compounds of a single strain of bacteria – Brevibacillus sp. Leaf182 – which was particularly productive. In so doing, they discovered several antibiotically active chemical substances. One of them, which the researchers named macrobrevin, exhibited a completely novel chemical structure.

“Now we need to clarify whether macrobrevin and other newly discovered substances are also effective against bacteria that cause disease in humans,” says Piel. This is an exciting possibility, he says, but even more exciting is having shown that the relatively unexplored phyllosphere still contains many antibiotically active natural products to be discovered: “I have no doubt that this incredibly diverse ecosystem will provide medical science with many new approaches. Our findings confirm that it is worth expanding the search for antibiotics in nature.”

All over the world, more and more pathogens are becoming resistant to today's antibiotics. Because medicines are losing their effectiveness, once easy-to-treat infections are turning into deadly diseases. The National Research Programme “Antimicrobial Resistance” (NRP 72) investigates possible counteractions to this development.

NRP 72 brings together human and veterinary medical practitioners, biologists and environmental scientists to work in an interdisciplinary setting. The One Health approach is pivotal. The causes and effects of antibiotic resistance affect humans and farm animals as well as the environment, for instance through the transmission of resistant germs in wastewater.

Increasing knowledge about resistance development and transmission mechanisms in order to interrupt these processes;

Making recommendations and proposing intervention measures for human and veterinary medical practitioners and farmers for a more targeted use of antibiotics.

On 24 June 2015, the Federal Council instructed the Swiss National Science Foundation to carry out the National Research Programme “Antimicrobial Resistance”. The overall budget for the programme amounts to CHF 20 million. The individual projects will be conducted at universities and higher education institutions throughout Switzerland and will be completed by the end of 2021

For more information on NRP 72 and its individual projects, please go to www.nfp72.ch

http://www.snf.ch/en/researchinFocus/newsroom/Pages/news-180727-press-review-a-n… 'Download images for editorial use and further information'
http://www.nfp72.ch/de/projekte/modul-2-neue-wirkstoffe-und-schnellere-diagnosti…