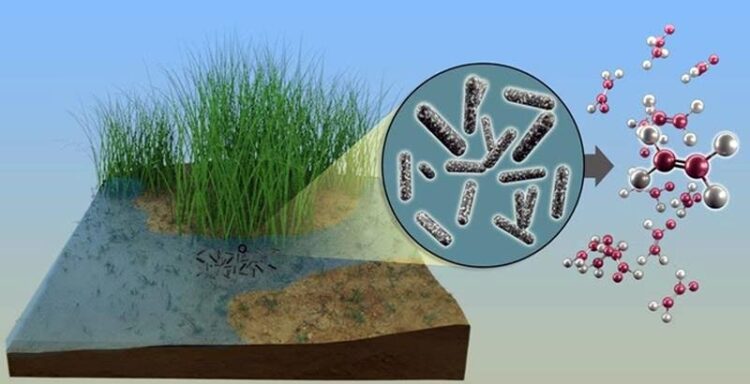 An enzyme system frees sulfur from small organic compounds to make a surprising gaseous side product.

Researchers often observe ethylene gas in oxygen-poor environments such as certain types of soil. For decades, scientists have known that ethylene comes from microbes. But the only known natural microbial processes that produce ethylene require oxygen. So how do oxygen-poor environments contain ethylene? A team of scientists have discovered an enzyme system from bacteria that produces ethylene without oxygen, shedding light on this paradox. These enzymes are called methylthio-alkane reductases. They function to scavenge sulfur from small volatile organic sulfur compounds. Depending on the compound used, these enzyme reactions produce ethylene, ethane, or methane as a byproduct.

Ethylene is both a potent plant growth hormone as well as the key chemical precursor to most plastics, making it the most produced and used industrial chemical on the planet. Plants naturally produce ethylene at the proper time and amounts for root elongation, shoot extension, fruit ripening, and programmed leaf death. However, upon waterlogging and flooding, soils accumulate ethylene produced by microbes. This ethylene can accumulate to levels harmful to plants, leading to crop damage. Researchers previously discovered that some soil and freshwater bacteria can produce ethylene in the absence of oxygen when they are starved for sulfur. The researchers tracked down the pathway in bacteria that produces the immediate ethylene precursor, (2-methylthio)ethanol. But the final enzyme step that made ethylene remained unknown. Recently, a team of scientists uncovered this remaining step. Through a concerted series of genetic manipulations, proteomics, transcriptomics, and thermodynamic modeling, the team identified the methylthio-alkane reductases as the missing link. Subsequent metabolite labeling experiments and targeted metabolomics identified the reaction catalyzed. These reductases perform carbon-sulfur bond cleavage of (2-methylthio)ethanol to liberate the sulfur, releasing ethylene as a byproduct. Similarly, ethylmethyl sulfide and dimethyl sulfide can be used, releasing ethane and methane, respectively. The discovery of methylthio-alkane reductases provides an explanation for ethylene production in oxygen-deprived flooded soils and may provide insight into how to prevent detrimental ethylene accumulation. Additionally, biological ethylene formation in the absence of oxygen has potential advantages for industrial bio-ethylene production. Discovery of the methylthio-alkane reductases completes the oxygen-independent ethylene producing pathway, paving the way for engineering bacteria strains that produce high levels of ethylene.

This material is based on work supported by the Department of Energy (DOE) Office of Science, Office of Biological & Environmental Research, an Ohio State University Center for Applied Plant Sciences Grant, and the National Science Foundation. Electronic structure calculations were performed by the Environmental Molecular Sciences Laboratory, a user facility sponsored by DOE at Pacific Northwest National Laboratory. Transcriptomics work was supported in part by the University of Colorado Cancer Center’s Genomics and Microarray Shared Resource, which is supported by the National Cancer Institute. Proteomics work at Oak Ridge National Laboratory was supported by the DOE Office of Science Genomic Science Program as part of the Plant Microbe Interfaces Scientific Focus Area.