Home / Life Sciences and Chemistry / A new species of tapaculo in South America
12.03.2015

A new species of tapaculo in South America 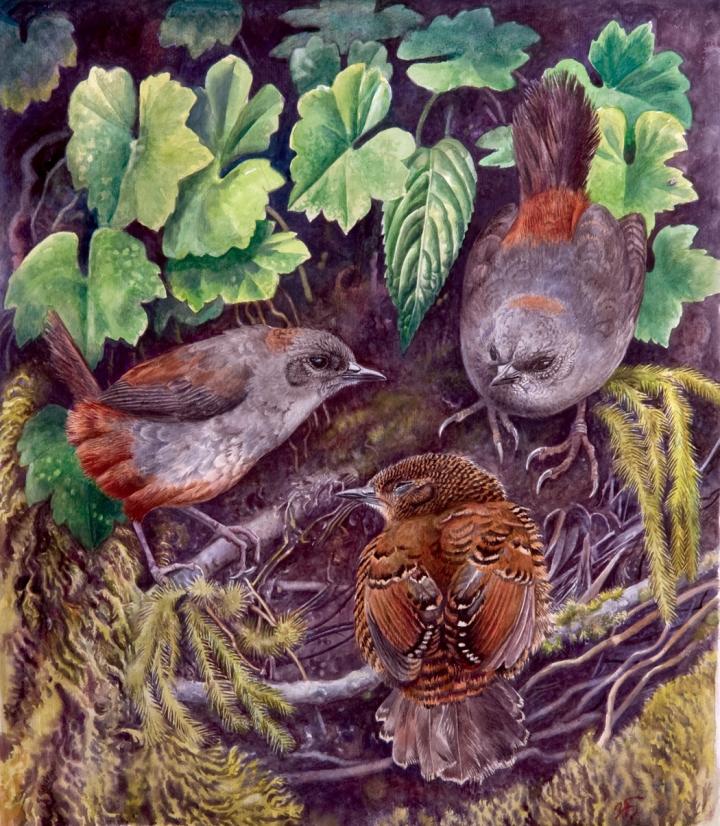 After being misidentified and sitting in a museum drawer for more than seventy years, a group of bird specimens collected in Colombia and Venezuela has been determined to represent a previously unknown species, now dubbed the Perijá Tapaculo (Scytalopus perijanus).

In a new paper in The Auk: Ornithological Advances, Jorge Avendaño of the Universidad de los Llanos and his colleagues describe how the Perijá Tapaculo differs from the other birds in its genus in its genetics, appearance, ecology, and vocalizations.

Tapaculos are a family of mostly small black or brown songbirds found in South and Central America, which forage for insects in grasslands and forest undergrowth. In 1941 and 1942, ornithologist Melbourne Carriker, Jr. explored the western slope of the Serranía de Perijá mountain range on the Colombian-Venezuelan border, where he collected 27 tapaculo specimens and sent them to the Smithsonian.

At the time, they were mistakenly identified as Scytalopus atratus nigricans, a similar bird found at lower elevations, and in the following decades these upper montane tapaculos remained overlooked and unstudied.

In 2008 and 2009, however, a new set of specimens and sound recordings was collected in the same region visited by Carriker, and Dr. Avendaño and his colleagues were able to conduct a genetic analysis as well as analyzing the birds' appearance and calls.

The newly-named Perijá Tapaculo is a small bird with a buffy belly, gray back, and brown nape, and its song and calls are distinctly different from those of other tapaculos. Its high level of genetic divergence from its closest relatives suggests that that its high mountain habitat has isolated it from its cousins for a significant amount of time.

“While it was known that two species occurred in the Perijá mountains, it was a distinct surprise that the upper elevational form differs as much as 8-9% from its closest relatives,” says tapaculo expert Niels Krabbe. “This emphasizes the importance of the Perijá mountains as an evolutionary center, and calls for further studies of its flora and fauna.”

Unfortunately, due to habitat loss in the region, this new species is already in trouble. “The species is more seriously threatened on the Colombian slope than on the Venezuelan slope because its habitat is protected by a large National Park in Venezuela,” explains Dr. Avendaño. “So, we recommend establishing a new national park or a network of reserves in Colombia connected to the Sierra de Perijá National Park of Venezuela. This binational park is necessary in order to effectively preserve the high species diversity and endemism of birds and other biological groups of the region.”

About the journal: The Auk: Ornithological Advances is a peer-reviewed, international journal of ornithology. The journal has been the official publication of the American Ornithologists' Union since 1884. In 2009, The Auk was honored as one of the 100 most influential journals of biology and medicine over the past 100 years, and currently holds the top impact factor among ornithological journals.