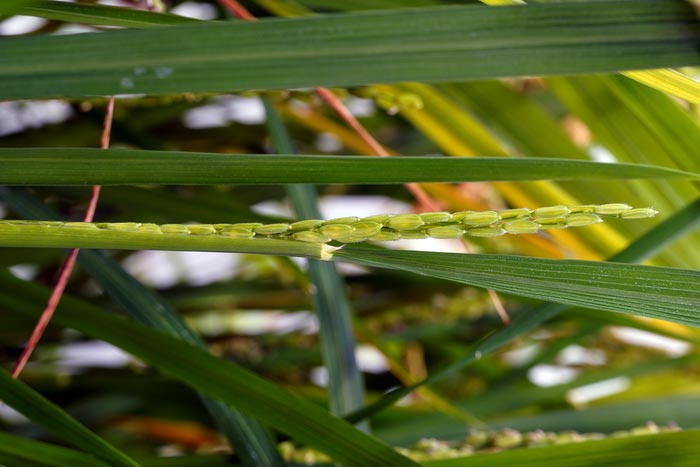 Light affects most organisms. In plants, many behaviors and functions are determined by the length of light and dark cycles, including flowering. In the most recent publication of The Proceedings of the National Academy of Sciences (PNAS), the team of researchers that brings together the Instituto de Tecnologia Química e Biológica António Xavier da Universidade NOVA de Lisboa (ITQB NOVA), the Leibniz Institute of Vegetable and Ornamental Crops (IGZ) and the Institute of Biochemistry and Biology and Postdam University, clarifies the role of the photoperiod and circadian clock components regulating rice flowering time.

The circadian clock – present in most living beings – is the internal mechanism that allows the organism to anticipate daily environmental changes, assuring proper function. In plants, the circadian clock and light signals result in photoperiodism – the physiological response to the duration of light periods that influences flowering time, among other functions. Photoperiodism varies between species. While the model plant Arabidopsis thaliana needs short nights to flower, rice requires long nights. This new study reveals that, in rice, it is the phytochrome B – a light receptor – that makes the connection between light and the Evening Complex, thus regulating the flowering time. In plants, the Evening Complex is a component of the circadian clock and consists of a group of proteins that are active during the night period and that regulate proteins linked to flowering.

The researchers found that, when activated by light, phytochrome B inactivates one of the Evening Complex proteins – the EARLY FLOWERING 3-1 (ELF3-1). This alteration leads to the expression of genes that repress flowering, culminating in late flowering. The team also showed that phytochrome B mutants have the ELF3-1 protein always active during both day and night, and these plants flowered much earlier. “When we have a longer dark period (long nights), there is a greater accumulation of the active ELF3-1 protein, which only appears at night, and this will trigger flowering” explains Nelson Saibo, leader of the ITQB NOVA team.

In addition, the study also solidifies the crucial role the Evening Complex plays in flowering. Through the CRISPR/Cas9 genetic engineering technique, the researchers studied rice variants with inactive Evening Complex proteins, including ELF3-1, but also ELF3-2, and LUX ARRHYTHMO (LUX). “Plants lacking the Evening Complex components never flowered, independently of the duration of light periods, leading to the conclusion that the activity of this complex is essential to induce flowering in rice” explains first author Luís Andrade, ITQB NOVA Ph.D. student.

“This study shows how a major pathway, that controls the flowering of millions of rice plants and is ultimately a key source of nutrition for billions of people around the world is actually controlled by a remarkably small number of master regulator genes, and how we are beginning to understand these key processes at a molecular level. How plants adapt to the environment is a major question, particularly during an era of climate change which is already altering plant flowering behavior”, comments Dr. Katja Jaeger, lead author from the IGZ in Germany.

Comprehending the connection between these changes in the components of the circadian clock and the different flowering times observed among the numerous rice varieties is the next step. “That will then allow, in a more targeted way, to adapt the different rice varieties and their flowering times to certain environmental conditions or regions,” says researcher Nelson Saibo. On-field application is also one of the main focuses for the future, as flowering is directly correlated with productivity. “By controlling the rice life cycle, we can potentially reduce the risks for rice cultivation,” says Luís Andrade. The manipulation of flowering time allows a better conciliation between the cultivation period and the environmental conditions, protecting the plants from potentially harmful situations, such as cold weather during the initial stages or drought and heat during the final growth stages, culminating in a likely increase in yield.