A Chip with Blood Vessels 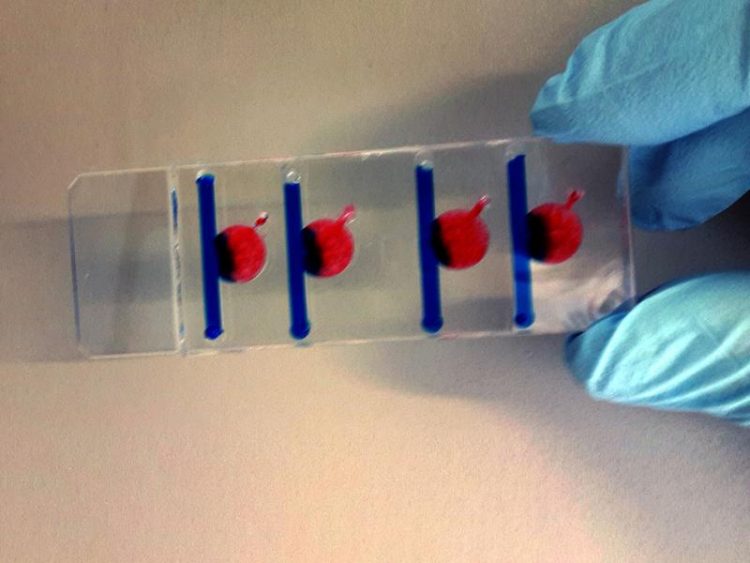 In any of the four chambers, different conditions can be created, which influence cell growth.

Cultivating human cells in the Petri dish is not a big challenge today. Producing artificial tissue, however, permeated by fine blood vessels, is a much more difficult task. Important transport processes in biology, for example the transport of oxygen, sugar and other substances into the tissue, have not yet been fully understood.

This is now going to change with a completely new approach to the problem: At the Vienna University of Technology, tissue is being grown on the biochip – so-called “organs-on-a-chip”.

This allows you to precisely control and measure complicated biological processes – much better than would be possible in animal testing or by experimenting on humans.
Better than animal experiments

“Around a fresh wound, new tissue has to regrow, in which, among other things, new blood vessels form,” says Dipl-Ing. Barbara Bachmann of the Institute of Applied Synthetic Chemistry at TU Wien. “We use the body’s natural wound healing processes to grow blood vessels in the lab in tiny biochips.”

For a long time, such research projects relied exclusively on animal experiments. “Animal experiments have many disadvantages – not only from an ethical point of view, but also on a scientific level,” says group leader Prof. Peter Ertl. “The results can never be perfectly transferred to humans, and so there are often surprising side effects in clinical trials that never showed up in animal models.”

With biochip technology, it is now possible to regulate the substances with which the human vascular cells are supplied with great precision. This makes it possible to cultivate and study human cells over the course of several weeks.

“In addition to endothelial cells that line the inside of the vessels, we also use stem cells that play a key role in stabilizing the vascular structures,” says Mario Rothbauer. “Almost magically, a network of tiny blood vessels emerges in the biochip within a few days.”

A tiny influx pipe, through which the tissue is supplied with oxygen and nutrients from outside, passes through the tissue next to this newly formed network of fine blood capillaries – it is the “artificial artery” of the biochip.

The fine, naturally-grown blood vessels are not directly connected to this artificial conduit, but the boundaries between the two areas are not densely sealed off, so that chemicals can pass through.

“This is a situation that is frequently encountered in medicine,” says Prof. Peter Ertl: “For example in wound healing, but also in diseases such as cancer.” A fast-growing tumor must find a way to obatin sufficient amounts of nutrients, therefore it usually causes an unnaturally fast growth of fine blood capillaries. This mass transfer between the tumor and the rest of the body can now be investigated much better in the chip.

“We were able to show that the supply actually depends on the distance to the influx pipe, as it would be the case in natural tissue,” says Dipl.-Ing. Sarah Spitz. “And another crucial finding was that we have been able to show that the nutrient supply to the tissue can be fine-tuned by changing the flow velocity in the biochips – it's that simple.”
Interdisciplinary research

In this field of research, several scientific disciplines are closely connected: medicine and chemistry, but also microfluidics (the science of the flow behavior of tiny amounts of liquids), or even material science and manufacturing technology had to be combined to make the precise production of the chips possible. TU Wien collaborated with the Ludwig Boltzmann Institute for Experimental and Clinical Traumatology, and was supported by the “Interreg” funding program of the European Union.

“Only through this interdisciplinary approach can we take on a leading role achieve research results that cause a stir internationally,” says Peter Ertl. “Our results show that the biochips provide an excellent model to study oxygenation in newly formed tissues. This is just the beginning for us. Remarkable new research opportunities are just opening up.”