A Cancer Gene Keeps Itself in Check 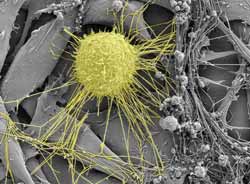 A breast cancer cell (yellow) under the electron microscope. Scientists from the Biozentrum of the University of Würzburg describe in the latest issue of “Molecular Cell” a feedback mechanism that regulates the activity of the Myc cancer gene. Photo: Kristian Pfaller

Cancer develops from a disturbed balance between the division, the growth and the death of cells. This is what makes it so difficult to treat this disease: the therapy must not be radical but moderate. The point is not to put out the fire in the house but to keep it in check – to make it burn in the fireplace and nowhere else.

To make this balancing act in the body work, the first point is to understand the principles of cell growth regulation. Here Theresia Kress from the working group of Professor Martin Eilers at the Biozentrum of the University of Würzburg has made an important discovery: In cooperation with an international team, she has found a feedback mechanism that adjusts the activity of the growth-inducing Myc “cancer gene” at the right level. This mechanism may play an important role in the development of colon cancer.

How the Myc “cancer gene” works

The Myc gene produces the so-called Myc transcription factor, which regulates a multitude of other genes and thus drives the growth and reproduction of cells. When the Myc gene gets out of control, it allows cell growth to run riot – this is why it is referred to as “cancer gene”.

But how does a cell notice whether there is enough Myc? Professor Eilers and his team had their sights on a specific type of enzyme, the so-called protein kinases, as a possible signal transmitter. So Theresia Kress deactivated all these kinases one by one and examined what happened then.

Proof of an inhibiting molecule

The strategy had success: The researchers found out that it is the protein kinase MK5 that inhibits the activity of Myc, and thus keeps cell growth in check. They also discovered how Myc inhibition works in detail, and which other genes and molecules are involved.

But most important of all, Kress and Eilers could demonstrate that the protein kinase is in turn activated by Myc. So the feedback comes full circle: the higher the level of growth-inducing Myc in the cell, the higher the production of the inhibitor – in this way Myc keeps itself in check, and the rate of cell growth remains in balance.

A further examination revealed that it is exactly this feedback mechanism which is blocked out in colon cancer cells. Now this could be one of the causes for the development of cancer, and thus a possible starting point for therapy.

The results are described in detail in the latest issue of the renowned journal “Molecular Cell”. The work was in the context of the Growthstop research project, which is sponsored by the European Union and coordinated by the Innsbruck-based project management firm CEMIT.

Growthstop is a research project of the 6th European Research Framework Programme (FP6). Its aim is the identification, development and validation of new therapeutics to induce a programmed cell death in tumors. The consortion has twelve members from Austria, Germany, Israel, UK, Spain and Hungary. It is headed by Professor Lukas A. Huber, director of the Biozentrum of the Medical University of Innsbruck. The project started in 2006 and is scheduled to continue until mid-2011.