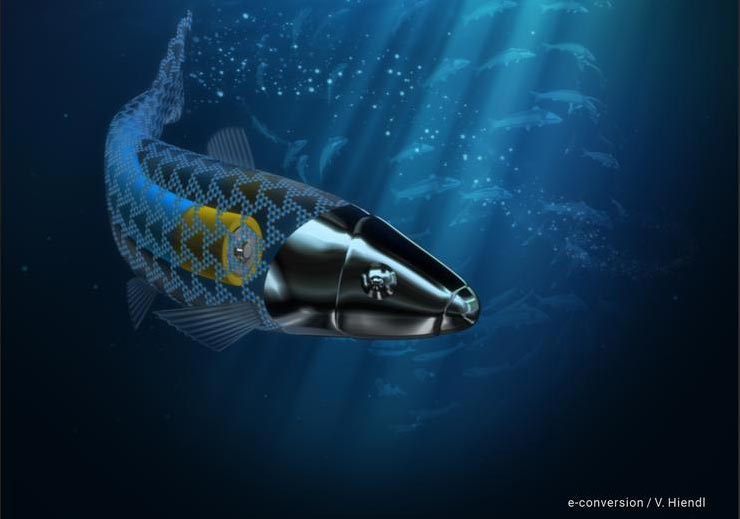 A microswimmer that swims through a liquid and operates much like a solar-battery.
e-conversion (Vera Hiendl)

An interdisciplinary team of scientists at the Max Planck Institutes for Intelligent Systems and Solid State Research has developed a biocompatible microswimmer made of carbon nitride, which they can propel forward through light. The particle can also store solar energy similar to miniature solar cells equipped with batteries, and can thus also swim in the dark using the stored energy. Even if the illumination is turned off, it can move forward for about half an hour with just 30 seconds of prior illumination.

The propulsion resulting from external sources of energy makes microswimmers highly attractive, active devices that show great promise for potential applications in fields of biomedical and environmental technology. Targeted drug delivery in hard-to-reach areas of the body is one example. Another is environmental remediation: microswimmers could one day be deployed to treat wastewater.

The downside is that such microswimmers require a continuous supply of external energy; otherwise, the propulsion is difficult, if not impossible. A microswimmer that can store external energy could be just the solution in a situation where energy is only available for a limited time or cannot be exerted in regions deep inside the body.

In recent years, publications presenting different versions of light-driven microswimmers have experienced a boom, as light is a great source of energy: it is abundant and one of the most widely exploited fuels to propel microswimmers. However, until now, photocatalytic microswimmers, also known as “photo swimmers”, have been limited by the requirement of continuous illumination during their propulsion.

An interdisciplinary team of scientists from the Max Planck Institute for Intelligent Systems (MPI-IS) and the Max Planck Institute for Solid State Research in Stuttgart (MPI-FKF) envisioned a new microswimmer that can store energy after an initial illumination and draw from the encapsulated power while it is operating in the dark – much like a solar cell that intrinsically stores energy for a later point in time.

The team developed a microswimmer made of a novel 2D carbon nitride they were able to propel forward in a liquid through both a visible and ultraviolet (UV) light – not only during, but even after illuminating it with light. After 30 seconds of prior light exposure, the microswimmer propelled forward for over 30 minutes in the dark thanks to its solar battery-like properties. The research project “Carbon Nitride-based Light-driven Microswimmers with Intrinsic Photocharging Ability” was published in the Proceedings of the National Academy of Sciences (PNAS) on September 22, 2020.

The project was a first-time collaboration between the Physical Intelligence Department at the MPI for Intelligent Systems led by Prof. Metin Sitti and the Nanochemistry Department at the MPI for Solid State Research led by Prof. Bettina Lotsch. Metin Sitti and his team specialize in new locomotion, design, fabrication, and control methods for wireless micromachines with the goal to one day use them inside the human body for targeted drug delivery, which could revolutionize healthcare. Bettina Lotsch and her team specialize in developing new material solutions and concepts for solar energy conversion and storage, with a major focus centered around light-matter interactions and the ensuing chemical reactivity.

“Combining our teams has given new insights into underlying mechanisms beyond the light-driven swimming micromachines and how to design and build such machines for future potential medical applications, which happen in the dark in regions deep inside the human body, and for environmental remediation applications,” said Sitti and Lotsch.

To build their ~3 micrometer-diameter small microswimmers, the team used potassium containing poly(hepazine imide), K-PHI – a layered carbon nitride material that has superior photocatalytic properties as it absorbs light well. While it does so, the carbon nitride creates a surface photo reaction causing the formation of electrons and holes, where the electrons get stored on PHI, thus accumulating charge as in a solar battery. The stored energy can later be used for the swimmer’s propulsion.

“While the carbon nitride absorbs light, it creates energy-rich electrons which can be discharged through redox reactions with their environment. Previously, scientists believed that a hydrogen evolution causes the propulsion, splitting water into hydrogen and oxygen. But this was not the case. We found that the electrons reduce oxygen and that causes the propulsion,” said Filip Podjaski, one of the lead authors of the publication and a scientist in the Nanochemistry Department at the MPI-FKF.

The team created three versions of the microswimmers by evaporating a thin layer of different metal catalysts: one group of microswimmers was partly covered in gold (Au), one with platinum (Pt), and another with silicon dioxide (SiO2). They separately studied each microswimmer group. In several experiments, they showed how they can propel the swimmers forward under both visible light and UV illumination, whether the tiny devices were swimming in water with alcohol or H2O2, or other fuels. The scientists found that platinum covered microswimmers swam the fastest with water and alcohol as fuel, whereas gold-covered devices, followed by silicon dioxide ones, showed the fastest propulsion with H2O2 as fuel. “The platinum covered PHI microswimmers were best suited for their ability to store charges under illumination and release them in the absence of light, enabling them to swim for minutes with mere seconds of illumination,” said Varun Sridhar, one of the lead authors and a member of the Physical Intelligent Department at the MPI-IS.

The research project has proven that nature-inspired, organic microswimmers can also be built. Never before has a PHI-based carbon nitride been introduced as the main building material for such swimming micromachines. This ticks the boxes of biocompatibility, tunability, and reduced costs, as carbon nitride is earth-abundant and easily obtained. This makes the PHI-based microswimmers particularly promising for potential medical (e.g., targeted drug delivery) and environmental remediation applications, due to their sensitivity to visible light, their soft organic nature, and the possibility of using biocompatible caps such as Au or SiO2. And the solar-battery swimming effect opens up many new opportunities, where micromachines need to operate without continuous fuel supply, and where environmentally or biologically benign materials are required. Last but not least, the charging effect reported in the publication opens the door to the creation of autonomous systems with built-in energy storage capabilities – like a light charged battery device, only a thousand times smaller. “In the future, we have to work on enhancing the balance to charge the particle much faster than it discharges, to use the energy more efficiently and perhaps also for other means than pure propulsion, but this is not easy to achieve,” said Podjaski and Sridhar.

“We are excited about the prospect of combining new energy materials with autonomous systems,” says Bettina Lotsch. “Until recently, the interface between these disciplines has largely been uncharted territory. We look forward to changing this.”

“I agree. We plan to continue our close collaboration with Bettina’s group to develop new advanced light-driven microswimmers, which are fully viable to use inside the human body in several centimeter-deep tissue regions for targeted drug delivery and other potential medical applications,” Sitti concluded.