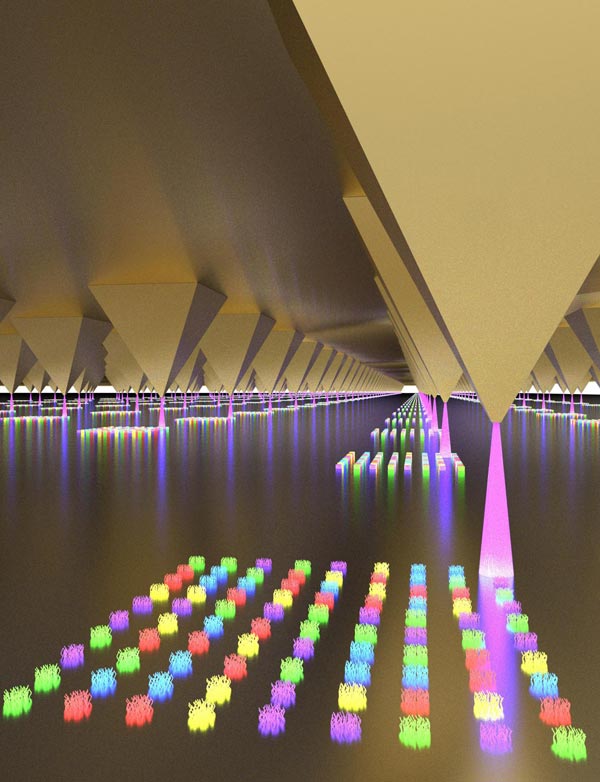 Biological probes are patterned into biochips using nanoscopic light-pens, allowing researchers to increase the number of probes that can be immobilized in a single chip. Credit: Advanced Science Research Center at the Graduate Center, CUNY

3-D printing has gained popularity in recent years as a means for creating a variety of functional products, from tools to clothing and medical devices. Now, the concept of multi-dimensional printing has helped a team of researchers at the Advanced Science Research Center (ASRC) at the Graduate Center of the City University of New York develop a new, potentially more efficient and cost-effective method for preparing biochips (also known as microarrays), which are used to screen for and analyze biological changes associated with disease development, bioterrorism agents, and other areas of research that involve biological components.

In a paper published today in the journal Chem, researchers with the ASRC's Nanoscience Initiative detail how they have combined microfluidic techniques with beam-pen lithography and photochemical surface reactions to devise a new biochip printing technique. The method involves exposing a biochip's surface to specific organic reagents, and then using a tightly focused beam of light to adhere the immobilized reagents to the chip's surface. The process allows scientists to repeatedly expose a single chip to the same or different factors and imprint the reactions onto different sections of the biochip. The result is a biochip that can accommodate more probes than is achievable with current commercial platforms.

“This is essentially a new nanoscale printer that allows us to imprint more complexity on the surface of biochip than any of the currently available commercial technologies,” said Adam Braunschweig, lead researcher and associate professor with the ASRC's Nanoscience Initiative. “It will help us to gain much better understanding of how cells and biological pathways work.”

An additional benefit of the new tool is that it allows researchers to reliably print on a variety of delicate materials–including glasses, metals, and lipids–on the length scale of biological interactions, and without the use of a clean room. It also allows scientists to fit more reactive probes onto a single chip. These improvements could, in theory, reduce the cost of biochip-facilitated research.

ASRC scientists are now exploring ways to fine tune their new technique for creating these biochips. “We want to be able to record even more complex surface interactions and reduce our resolution down to a single molecule,” said ASRC Research Associate Carlos Carbonell, the paper's lead author. “This technique gives rise to a new method of microarray creation that should be useful to the entire field of biological 'omics' research.”

About the Graduate Center of the City University of New York

The Graduate Center of the City University of New York (CUNY) is a leader in public graduate education devoted to enhancing the public good through pioneering research, serious learning, and reasoned debate. The Graduate Center offers ambitious students more than 40 doctoral and master's programs of the highest caliber, taught by top faculty from throughout CUNY — the world's largest public urban university. Through its more than 40 centers, institutes, and initiatives, including its Advanced Science Research Center (ASRC), the Graduate Center influences public policy and discourse and shapes innovation. The Graduate Center's extensive public programs make it a home for culture and conversation.

About The Advanced Science Research Center

The ASRC at the Graduate Center elevates scientific research and education at CUNY and beyond through initiatives in five distinctive, but increasingly interconnected disciplines: environmental sciences, nanoscience, neuroscience, photonics, and structural biology. The ASRC promotes a collaborative, interdisciplinary research culture with renowned researchers from each of the initiatives working side-by-side in the ASRC's core facilities, sharing equipment that is among the most advanced available.