Scientists complete most comprehensive genetic analysis yet of corn 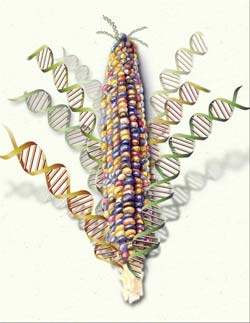 An interdisciplinary team, led by researchers at Cornell University and the U.S. Department of Agriculture-Agricultural Research Service (USDA-ARS), today published the most comprehensive analysis to date of the corn genome.

The team expects the achievement to speed up development of improved varieties of one of the world's most important agricultural commodities. The results should boost international efforts to increase yields, expand areas where corn can be cultivated and produce varieties better equipped to resist pests and disease.

Funded in the United States by the National Science Foundation (NSF) and the USDA, the work was a collaborative effort by scientists at 17 U.S. and foreign institutions that include the University of Wisconsin-Madison; University of Missouri-Columbia; North Carolina State University; Beijing Genome Institute; University of California, Davis and the International Maize and Wheat Improvement Center, Mexico City, Mexico.

The study appears in two corn genome projects published in separate reports in the June 3 issue of the journal Nature Genetics.
“This work represents a major step forward and an important tool in the arsenal available to scientists and breeders for improving a vital source of nutrition,” said Edward B. Knipling, administrator of USDA's Agricultural Research Service.

The analysis could also help those, who develop corn yields as a source of fuel, who manage crops in the face of changing climates and who are concerned about the diminishing supply of arable land and growing populations, he said.
“This project is a stellar example of how collaborations of scientists, here and abroad, leverage resources across multiple agencies to enable transformational research with the potential to address urgent societal needs for a bio-based economy,” said John Wingfield, assistant director for NSF's Biological Sciences Directorate.

It is anticipated that the tools and approaches generated in this project will enable scientists to look at genetic differences in other organisms as they respond to global climate change, human disturbance and invasive species, Wingfield explained.

The studies' collaborators shed light on corn's genetic diversity, detail how it evolved and outline how corn–known as maize among scientists–continues to diversify as it adapts to changing climates and habitats.

One study, published in the journal led by team member, USDA-ARS and Cold Spring Harbor Laboratory scientist Doreen Ware, examines the genetic structure and the relationships and sequential ordering of individual genes in more than 100 varieties of wild and domesticated corn.

Another study led by team member Jeff Ross-Ibarra from the University of California, Davis gives an extraordinary glimpse into how corn evolved more than 8,700 years ago from a wild grass in the lowland areas of southwestern Mexico into today's ubiquitous international commodity.

The researchers compared wild varieties with traditional corn varieties from across the Americas and with modern improved breeding lines. They identified hundreds of genes that played a role in the transformation of corn from its wild origins to today's cultivated crop and show how that transition was largely achieved by ancient farmers who first domesticated it thousands of years ago.

Last year, the economic value of the U.S. corn crop was $76 billion with U.S. growers producing an estimated 12 billion bushels, more than a third of the world's supply. Corn is the largest production crop worldwide, providing food for billions of people and livestock and critical feedstock for production of biofuels.