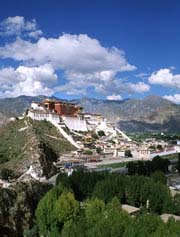 David Zhang and S. H. Li of the University of Hong Kong found the marks of at least six individuals, including two children, in marble-like rocks that were once soft mud on a mountain slope 85 kilometres from the Tibetan capital, Lhasa1.

They also found a fireplace nearby, with the remains of a primitive stove, suggesting that the site was a camp, perhaps even a settlement.

Until now, the oldest known settlements on the Tibetan plateau dated from late Neolithic times, around 4,000 years ago. This had led some researchers to conclude that humans first migrated into Tibet around this time.

The encampment is also a nail in the coffin for the ice-covered plateau hypothesis. It indicates that at least part of the plateau, which today is 4,000 metres high on average, was free of ice even during this frigid period of Earth’s history.

The very hot spring that probably attracted the Ice-Age settlers also preserved their marks for posterity. The spring water is rich in dissolved minerals and gases. As carbon dioxide gas bubbles out of the water, minerals such as calcite precipitate out. This forms a soft mineral mud. As the mud dries, it turns into a hard, durable limestone called travertine.

So, thanks to the hot spring, the mountainside made plaster casts of the Ice-Age people who lived on it. Nineteen hand- and footprints are clearly visible in the stone surface.

Zhang and Li date the travertine deposit by the tiny grains of quartz that got trapped within it while the mud solidified. Quartz acts as a mineral clock. When heated, it emits light in proportion to the time that has elapsed since it was last warmed or exposed to sunlight.

This technique is called thermoluminescence dating. Energy builds up in trapped quartz because it is exposed to radiation from natural radioactive elements such as uranium and thorium in surrounding minerals. It emits this energy as light: the longer the exposure time, the higher the energy and so the brighter the light.

Because heat or sunlight releases the trapped energy, the quartz grain clock would have been set to zero when the grains became embedded in the warm mud from the spring.