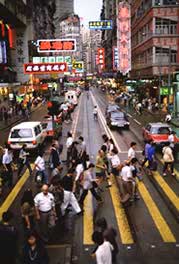 Paying attention isn’t the only way to learn.

You must pay attention to learn, teachers say. Not necessarily, US psychologists now argue: sights we are unaware of can have a lasting impact on our brains.

Subliminal training can improve our ability to see moving dots, Takeo Watanabe and his co-workers at Boston University, Massachusetts, have found. “Without noticing, we are unconsciously learning,” Watanabe says. Repeated exposure to objects we are oblivious to “could have a tremendous effect on our brains”, he says.

The findings show that for basic visual processes “the brain is never resting”, says Robert Stickgold, who studies consciousness at Harvard University in Cambridge, Massachusetts.

Psychologists must now ask whether we can learn more complex tasks without paying attention, says Stickgold. Although for students looking to skip school he cautions that “No one’s going to learn a foreign language without going to lessons.”

We are learning automatically as we walk around, explains Ken Nakayama, who studies vision at Harvard. “Patterns pass us all the time,” he says, like cars and people on the street. Subconscious learning may be an efficient way to absorb these sideline features without trying. “You can’t pay attention to everything,” he says.

Such a learning strategy may have evolved to help us incorporate recurrent, and therefore important, information about our environment into our memory, thinks Watanabe. Animal movements are a good example.

The results also suggest we cannot screen out irrelevant, unwanted information. This is worrying, given that today we are bombarded with moving images from TVs, neon signs and even mobile phone displays. “The less the world we’re living in is like the one we evolved in, the more the mechanism is inappropriate,” says Stickgold.

Watanabe’s team asked subjects to look at letters on a screen. Surrounding the letters were dots moving randomly, like the background fuzz after TV programmes have ended for the night. The participants did not realise that 5% of the dots were moving consistently in one direction.

After 25 days of subliminal training, people were tested on their ability to see a detectable level (10%) of dots moving in one direction. They were 20% better than normal at seeing the movement orientation they had previously been exposed to1.

Certain features of an object, such as movement or colour, make nerve cells in the brain fire. Subliminal training may fine-tune these cells, making them especially sensitive to a particular direction of motion, the team thinks.