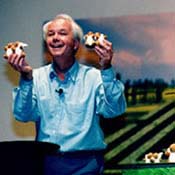 Ian Stewart was turned on to mathematics at the age of seven. A broken collarbone freed him from an uninspiring teacher allowing his mother to ignite his interest in numbers while he was laid up at home.

His writing career began with a series of how-to manuals for now-defunct early 1980s microcomputers. It has since broadened into popular science and science fiction – often in the same book – as well as texts aimed at fellow mathematicians.

Stewart is now professor of mathematics and director of the Mathematics Awareness Centre at the UK’s University of Warwick. John Whitfield visited him here to talk about his latest book, What Shape is a Snowflake?, and mathematics’ place in biology.

Do you think that the handful of mathematical and physical concepts needed to explain a snowflake are also enough to build the entire Universe?

Just about. You should always be sceptical about these grand theories, but a lot of the explanations of patterns in nature turn out to have quite a lot of things in common. The snowflake has a small number of ingredients, but those ingredients are very general and very powerful.

One is symmetry. This is one of the great principles of science. Albert Einstein said that the whole point of physics is to capture the symmetries of the Universe, meaning that the laws of nature are the same at all places and times. The next ingredient is dynamics, systems that change over time.

The pattern you see in a snowflake is a record of how it grew. And the complexity of the patterns is related to chaos – the ability of a dynamical system that’s following rules to do very complicated, almost random-looking things. So already we’ve got three of the big principles of mathematical physics.

Do still deeper generalities underlie this handful of concepts?

Physicists would claim they’ve reduced the whole of the Universe to two different principles: quantum mechanics and relativity. They are working to get that down to one, and I’m pretty sure they’ll get there. For the physical sciences, that kind of reduction of rules to deeper and more fundamental principles works extremely well.

In the biological sciences, our understanding is less the sort of thing you can reduce to an equation. At the moment it’s not useful to try to get at universal principles. Because we don’t know good equations for, say, biological development, there’s no point in trying to push it to a deeper level. Maybe one day we’ll be able to do that, but I’m sceptical.

In physics, you can usually say in advance what a system can do; then the physicist’s job is to work out what off that list it actually does. In biology, the system builds its own possibilities as it develops and evolves. Saying in advance what the space of possibilities is seems to be either very difficult or impossible. In a way, biology makes up the rules as it goes along. The really interesting developments are when it makes up a new rule.

Can you give an example of such a new rule?

Let’s go back to when everything on Earth were bacteria, about 3.5 billion to 4 billion years ago. Bacteria in the oceans and on the seashore are busily producing oxygen, which is accumulating in the atmosphere and really doing nothing – it’s poisonous to their metabolism, it’s pollution.

The most important change in the whole history of the planet was when life discovered a way to use that oxygen. The eukaryote cell appeared, which protected itself against the corrosive effects of oxygen, and made use of the nice big energy source.

All the while we lived in a prokaryote universe, with oxygen just accumulating, the rules for eukaryotes weren’t there. You couldn’t even predict them – they were unwrapped as it happened. In biology, you can’t see the really dramatic developments coming.

So if it’s so hard to make general statements and predictions in biology, why have you tried to work out what must be true for all life, for example on other planets, rather than just life as we see it?

Some general principles would work out in much the same way for living creatures elsewhere in the Universe, possibly made out of different kinds of molecules from us, or possibly not even made of molecules. Evolution by natural selection would still work, for example.

If aliens are on a planet with a fairly good atmosphere, they’re going to evolve flight, because that gives a huge advantage to the first creatures that can do it. Flight’s evolved many times on this planet. So that’s a universal feature that you can predict will happen. But you couldn’t go to the alien planet and say: “In 75 million years this particular creature will develop into a butterfly.” What you can say is: “Come back in 100 million years and flight will have evolved.”

Your latest book is full of comparisons, such as the symmetry of faces, and crystals, and the laws of physics. You talk about seeking “a similarity beyond metaphor”. How do we know that when we see it?

We handle metaphors without having to work very hard – if I describe something as being the size of an elephant, everybody knows what I’m talking about. Our brains work in a very top-down way. The problem with that is that you can see metaphorical connections between things, and people get very excited about them, without really having a good theoretical underpinning of why the metaphor works, and sometimes it doesn’t.

For metaphors to be good science, you need something a little stronger. You need to say: there’s a process going on in both these examples; it’s the same process; I can formulate what that process is; and I can do some maths and science with that process. If everything works at that level, your metaphor’s got some backbone to it.

In particular, I had in mind the passage where you compare biological speciation, where one species becomes two, to bifurcations, where the mathematical state of a system alters dramatically. What do you say to the charge that that similarity doesn’t go beyond metaphor – that the underlying mechanisms are probably quite different?

A short while ago, I would have agreed. I started getting interested in the similarities when my biologist collaborator, Jack Cohen, wanted to understand what mathematicians call symmetry breaking. I was explaining this in terms of things like ping-pong balls collapsing when you take them to the bottom of the ocean, and he said: “Speciation – that’s symmetry breaking, isn’t it?”

First I thought he didn’t understand what I was talking about. Then I asked him what he meant. He said: if you’ve got one species, that’s a very symmetric situation, because all the animals are pretty much the same, but two species must be less symmetric.

We’ve written a few papers about this as a mathematical metaphor for speciation, modelling a species as identical organisms and worrying about the differences between individuals later on. These models turn out to include a general mathematical process, called bifurcation, where the state of the system changes quite dramatically, even though the system’s environment only changes a small amount.

The models produce some general predictions: the split happens very fast, on an evolutionary timescale, and the two new species ’pull apart’ in opposite directions compared with the original. For instance, if the original species is a bird with a medium-sized beak, then the species splits into one with a big beak and one with a small. The average size of beak doesn’t change at all.

Until very recently, I’d have left that as a metaphor. But there have been several bits of work looking at specific mechanisms of speciation – sexual selection in sticklebacks, say – that seem to fit into our mathematical framework of bifurcation and symmetry. Now we’ve got something to nail down and test, with experiments on bacteria, for example. It looks as if it’s going to go beyond metaphor and into science.

Do biologists, with their focus on detail, neglect general mathematical explanations?

I think they do. Historically they were right to. Before genetics, the kind of mathematical descriptions that I like, such as Alan Turing’s models of spots and stripes, were in favour with biologists. They looked at the organisms, and the patterns, and made guesses about the general principles.

But that doesn’t have much predictive power. Current mathematical models don’t correspond very closely to genetics and biochemistry. When biologists began to look at DNA and protein structure it opened up a different way of thinking. Unfortunately, biology went so overboard for molecular descriptions that it lost sight of other things.

Now biologists are starting to put it all together again, which is very encouraging. Many people working in DNA sequencing say that to understand how proteins fold, we need a lot of maths. A sequence alone doesn’t tell us anything about the geometry of a protein, which is the important thing.

There are other areas of biology where it’s beginning to dawn on people that the same thing needs to be done. Development is full of things where the dynamics of growth matters. Understanding the genetics will give you some information, but there are mathematical constraints on how it will happen.

At the level of the cell, there’s a lot going on in genetic networks where just listing the genes and what switches on or turns off what gets you the beginnings of understanding, but not enough, because even very simple networks are quite subtle dynamically.

One of the most interesting areas for the next 100 years or so will be the linking of the mathematical ideas of dynamics, pattern formation, fractals, symmetry with the information that comes out of genetics, biochemistry and DNA and what is beginning to be understood about the way that organisms develop. It will forge a new kind of science, and a new kind of mathematics, which really makes use of the strengths of all those areas. It’s not a bit of maths and a bit of biology, it’s what happens when you let maths and biology talk to one another for 25 years, and see what comes out of that interaction.