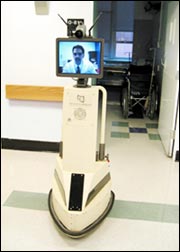 It lacks the warm bedside manner of Marcus Welby or Dr. Kildare, but a high-tech robot being tested at The Johns Hopkins Hospital could be used to link patients with their physicians in a whole new way.

Vaguely resembling a human torso, in a Star Wars R2D2 sort of way, the robot sports a computer screen for a head, a video camera for eyes and a speaker for a mouth. It walks, in a manner of speaking, on three balls, talks, and most importantly, listens. “That´s because the robot is directly linked to a real doctor who uses the robot as it ears, mouth and eyes,” says Louis Kavoussi, M.D., Hopkins professor of urology and a pioneer in robotic surgery. “And patients love it. I was very surprised how much our patients enjoy remote video interactions via the robot.

According to Kavoussi, the positive response to the robot supports the results of earlier studies done at Hopkins that found patients like using teleconferencing technology, in addition to traditional bedside visits, to communicate with their physicians. “Any technology that facilitates communications between patient and physician is welcome by both,” he says.

Billed as the world´s first remote-presence robot by its manufacturer, InTouch Health Inc, the robotic system works something like an ultrarealistic video game, complete with a joystick for moving it about. Looking at a computer terminal, the doctor directing the robot sees what the robot sees and hears what the robot hears. At the other end, patients can see and talk to the doctor´s face displayed on a flat screen that sits on the robot´s “shoulders.” All of this is connected to the Internet via broadband and a wireless network. “Many health care facilities and long-term care communities lack the resources to maintain a staff of all the medial specialists needed,” says Kavoussi. “The robot has the potential to fill this vacuum by enabling remote medical experts to ‘virtually´ consult with caregivers, patients, residents and family members at the point of care, whenever and wherever they are needed.”

So far, Dr. Robot has visited 20 patients, Kavoussi says. “Generally, the robot has been used to check up on patients in between when they would normally see a physician. During these visits, we ask them about how they are feeling, inspect their surgical sites to ensure they are healing properly, and answer any questions they have.”

He points out that while robots will never totally replace the human touch that physicians provide their patients in person, they can augment the regular interactions between patients and their physicians as well as be useful when it´s not practical or possible to physically send in physicians, such as in military operations, natural or bioterrorist disasters, at sea, or in other remote or underserved locations.”