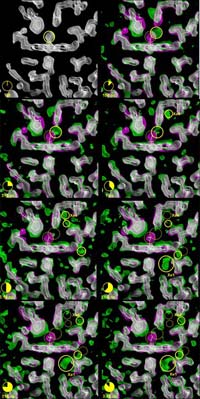 Migration of the CO after photolysis. The sites that are currently occupied by the CO are marked by solid yellow circles. Sites from which the CO has departed are depicted by a dotted yellow circle

A team of scientists from the USA in collaboration with staff at the European Synchrotron Radiation Facility (Schotte et al) have managed to film a protein at work in unprecedented detail. The protein is the oxygen-storing molecule myoglobin, which plays a central role in the production of energy in muscles. The motion of the protein was recorded using ultra-short flashes of X-ray light from the synchrotron. The new insight in the functionality of myoglobin has led to a deeper understanding of the molecular processes associated with respiration. An article on the subject was published Friday 20 June in “Science” under the title Watching a Protein as it Functions with 150-ps Time-Resolved X-ray Crystallography.

Every time we contract a muscle, myoglobin releases oxygen which is used by all mammals for the production of energy. Muscle cells use myoglobin as a peak-load buffer when blood cannot supply oxygen fast enough, for example when the circulation is blocked during muscle contraction. The oxygen molecule is initially confined in a cavity called the heme-pocket, where it is chemically bound to an iron atom.

The three-dimensional pictures taken at the ESRF resolve positions of all the 1432 atoms in the protein, and pinpoint how the carbon monoxide (CO) molecule – used here as a replacement for oxygen (O2) for technical reasons – literally finds its way out of the very dense atomic structure near the iron atom. The scientists have discovered that the CO molecule does not move out smoothly; in fact it spends most of its time captured in 5 tiny cavities inside the protein. In the first cavity near the iron atom, the CO molecule makes an extremely brief visit lasting only 100 picoseconds2, i.e. a tenth of a billionth of a second. Iron would naturally try to rebind CO, but nearby molecules block the CO from going back to the iron. The film has shown that the motion between the 5 cavities is very fast. The CO molecule reaches the fifth cavity after 30 nanoseconds and then it disappears into the solvent surrounding the protein. The interesting thing is that eventually another CO molecule, released from a myoglobin molecule nearby, will diffuse back towards the iron, most likely through another route. The iron accepts the incoming CO due to the fact that the structure of the protein has changed to allow for the rebinding.

Watching myoglobin as it functions is more complicated than it may seem. First of all, the scientists have to control the start of the experiment extremely precisely. The experiment begins by the injection of a flash of laser light to perturb the molecules and release the CO molecule inside the protein. Very shortly afterwards, they expose the protein crystal to an intense flash of X-rays. The X-rays are scattered by the protein into diffraction3 pictures that are later analysed by computers. The duration of an X-ray flash from the synchrotron is as short as 100 picoseconds and that is in principle the shortest time duration that can be investigated at the ESRF.

About the “scenario” for the filming

The live filming of the protein took place in ID09, one of the 40 beamlines at the ESRF. A beamline is a laboratory for X-ray studies. The X-ray radiation enters the experimental cabin and “shoots” on a sample, in this case, a crystallised protein. This beamline, called White Beam Station, is a beamline designed for time-resolved experiments in macromolecular crystallography and liquids, and also for high pressure research. Its unique feature is the focused white beam, which can be used for time-resolved diffraction on macromolecules.