Home / Interdisciplinary Research / Reducing side effects during the treatment of brain tumours
24.08.2020

Reducing side effects during the treatment of brain tumours 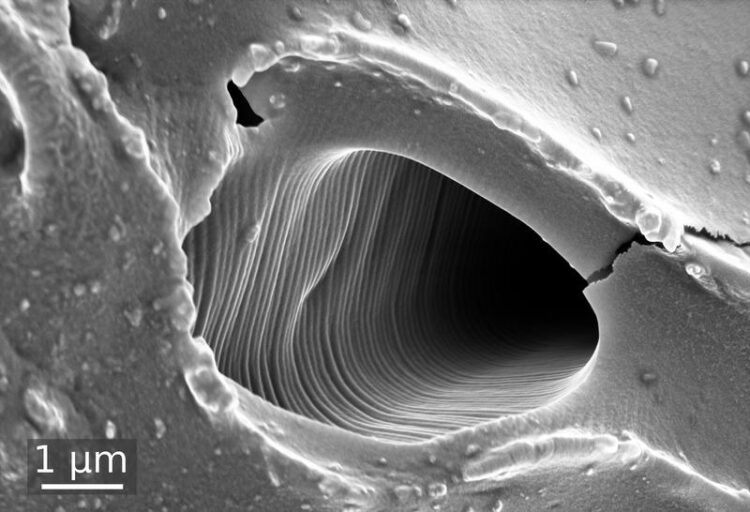 One of the microchannels of the structure at 12,000 times magnification under a scanning electron microscope.

Glioblastomas are among the most aggressive brain tumours in adults and difficult to treat due to their rapid growth and their diversity. Usually, the malignant tumours cannot be completely or permanently removed by surgery. Thus, a combined radio- and chemotherapy follows, which, however, can be associated with side effects on the entire human body. So-called local therapy approaches are therefore being explored as possible alternatives. These do not act systemically, but release drugs in low concentrations, specifically where they are actually needed. This can help to relieve the entire body and reduce side effects.

Scientists from the fields of materials science and medicine at Kiel University (CAU) and the University Medical Center Schleswig-Holstein (UKSH), Campus Kiel, are working on more gentle treatments like these. In the Research Training Group 2154 “Materials for Brain”, they are jointly developing new materials for local treatment strategies of chronic brain diseases such as epilepsy, aneurysms or tumours.

For the treatment of glioblastomas, they have recently presented an approach which uses a special microstructured silicone matrix. This could enable a more tailored drug release in the brain over a long period of time, allowing a more gentle and efficient treatment. Their study has been published in the journal ACS Biomaterials Science & Engineering, and also featured on the cover page of the issue.

Silicone structure releases drug in the brain over several days

“Previous local approaches can release large quantities of a therapeutic substance within a short period. We want to deliver drugs continuously and longer in order to inhibit the growth of tumours over a long period of time,” says materials scientist Florian Rasch, one of the first-authors of the study from Kiel.

In a close collaboration between materials science and medicine, the research team developed a special material structure made of biocompatible silicone, just a few millimetres in size, which can release therapeutic substances. They etched fine microchannels of about two micrometres in diameter into the material, which corresponds to one tenth of a human hair. “These microchannels form a densely-branched network, which we can fill with different drugs,” explains the doctoral researcher from the Chair for Functional Nanomaterials.

After the surgical removal of a glioblastoma, the material can be placed directly in the resection cavity of the brain – that is the goal of the research team. There, the drug will be slowly released from the microchannel network and directly unfolds its therapeutic effect on the remaining tumour cells. “The lower the number of the open channels in the material, the longer it takes until the entire drug is released into the brain,” says Christina Schmitt, who participated in the study as a doctoral researcher at the Institute for Anatomy Kiel. She has now completed her PhD in the field of life sciences.

Material can be adapted to different tumours and treatments

In the study, the team worked with the drug AT101, which is derived from cotton plants and is interesting for the treatment of glioblastomas due to its tumour-inhibiting potential. “We were able to show that the drug can be released over a period of up to ten days. In principle, even periods of several weeks to months are possible,” says Vivian Adamski, who has now completed her PhD in biochemistry.

As a doctoral researcher at the Department of Neurosurgery in Kiel, she examined the efficacy of the released drug in cancer cells, while Schmitt investigated the effects on healthy cell cultures. The study was carried out in the framework of a combinatorial treatment approach, consisting of the standard glioblastoma therapeutic temozolomide and the drug AT101 released from the microchannel system. “We observed significant growth inhibiting and cytotoxic effects on glioblastoma cells, while the healthy cells remained largely unaffected. These results are promising for further investigations,” adds Adamski.

Importantly, the researchers can adapt the drug release profiles to the individual tumour and the required treatment schemes by varying the number of channels in the silicone structure and changing the size of the implant material. Other drug delivery systems based on microchannels could only be achieved with far more complex and expensive manufacturing processes in special cleanroom environments. However, the technical requirements in those approaches hardly allowed any individual adjustments.

With this initially purely mechanical model study, the Kiel researchers want to simulate the drug delivery as realistically as possible, before developing the silicone structure further for specific medical applications and investigations in model organisms. In the long term, they hope to be able to influence the drug release even more, for example by externally activating or deactivating it on demand.

“In the future, research in such complex medical challenges can only be advanced in a close interdisciplinary cooperation. The Research Training Group 2154 offers the ideal conditions for this, and we look forward to conveying these interdisciplinary skills to talented early career researchers from Germany and abroad,” says Professor Rainer Adelung, head of the Chair for Functional Nanomaterials and spokesperson of the RTG.

About the RTG 2154
The development of new materials for the treatment of chronic brain diseases such as epilepsy, aneurysms or tumours is the goal of the interdisciplinary Research Training Group 2154 “Materials for Brain” at Kiel University (CAU). National and international doctoral researchers from the fields of materials science and medicine conduct research here in close cooperation, together with professors from the Faculty of Medicine and the Faculty of Engineering. Stays abroad, meetings, workshops and coaching support the research and qualification programme, which is funded with around 4.1 million Euros from the German Research Foundation (DFG) since 2017. The second generation started on 1 April 2020 with 12 doctoral researchers. http://www.grk2154.uni-kiel.de/en

About KiNSIS
In the nano-cosmos, different laws prevail than in the macroscopic world – those of quantum physics. Understanding structures and processes in these dimensions and implementing the findings in an application-oriented manner is the goal of the priority research area “Kiel Nano, Surface and Interface Science – KiNSIS” at Kiel University (CAU). The intensive interdisciplinary cooperation between physics, chemistry, engineering and life sciences could give rise to innovative sensors and materials, quantum computers, advanced medical treatments and much more. http://www.kinsis.uni-kiel.de

Photos are available for download:
http://www.uni-kiel.de/de/pressemitteilungen/2020/189-glioblastom-2.jpg
Caption: The size and composition of the silicone structures, measuring just a few millimetres, can be adapted to the corresponding tumour.
Photo: Florian Rasch

http://www.uni-kiel.de/de/pressemitteilungen/2020/189-glioblastom-3.png
Caption: Through the long, densely-branched microchannel network, therapeutic agents can be delivered directly to the brain over an extended period.
Image: Florian Rasch

http://www.uni-kiel.de/de/pressemitteilungen/2020/189-glioblastom-4.jpg
Caption: One of the microchannels at 12,000 times magnification under a scanning electron microscope.
Image: Florian Rasch