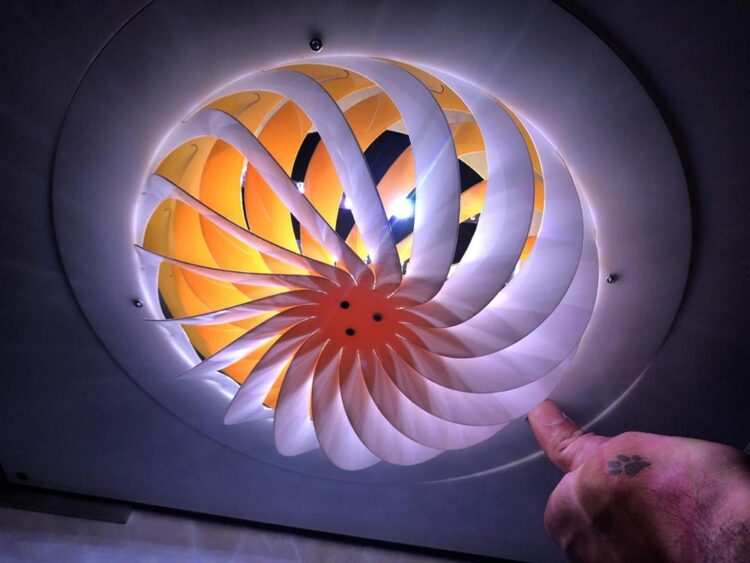 By harnessing the mechanical instabilities in curved beams, researchers developed a system that can transform objects into elaborate and customizable 3D configurations. Above, the researchers demonstrated a lamp shade that can open and close in a simple motion.
(Credit: Saurabh Mhatre/Harvard University)

Deployable structures — objects that transition from a compact state to an expanded one — are used everywhere from backyards to Mars. But as anyone who has ever struggled to open an uncooperative folding chair knows, transforming two-dimensional forms into three-dimensional structures is sometimes a challenge.

Now, researchers from the Harvard John A. Paulson School of Engineering and Applied Sciences (SEAS) and the Harvard Graduate School of Design have developed a deployable system that is light, compact, inexpensive, easy to manufacture, and, most importantly, easy to deploy. By harnessing the mechanical instabilities in curved beams, the system can transform objects into elaborate and customizable 3D configurations on a range of scales, from large-scale furniture to small medical devices.

“Most buckling-induced deployable structures, like folding chairs, are activated by compressive forces that are created through the linear displacement of elements,” said Saurabh Mhatre, a research associate at GSD and first author of the paper. “Our approach is different in that the compression force is generated through a rotational movement, which in turn induces buckling as the trigger for the 2D-to-3D transformation.”

The interdisciplinary research team of designers and engineers used a combination of experiments and numerical analyses to understand the geometry of curved, slender beams and what happens when those beams rotate and buckle. By harnessing buckling – a normally undesirable phenomenon in design and engineering — the researchers were able to design deployable structures with a simple rotational motion.

To demonstrate the system, the team built a lampshade that can be rotated to let in more or less light and a coffee table that can fold flat and pop-up in one simple motion.

“This new platform can be extended to realize functional structures and devices from the millimeter to meter scale using a variety of different materials,” said Katia Bertoldi, the William and Ami Kuan Danoff Professor of Applied Mechanics at SEAS and senior author of the study. “These structures could be used as medical devices, optical devices like camera focusing mechanisms, deployable wheels and turbines, furniture, or deployable shelters.”

The research was published recently in Advanced Materials. It was co-authored by Elisa Boatti, David Melancon, Ahmad Zareei, Maxime Dupont and Martin Bechthold. It was supported in part by the National Science Foundation through the Harvard University Materials Research Science and Engineering Center under grants DMR2011754 and DMR-1922321.

A new approach to curing HIV