Home / Interdisciplinary Research / On the way to the optical cochlear implant
23.07.2020

On the way to the optical cochlear implant 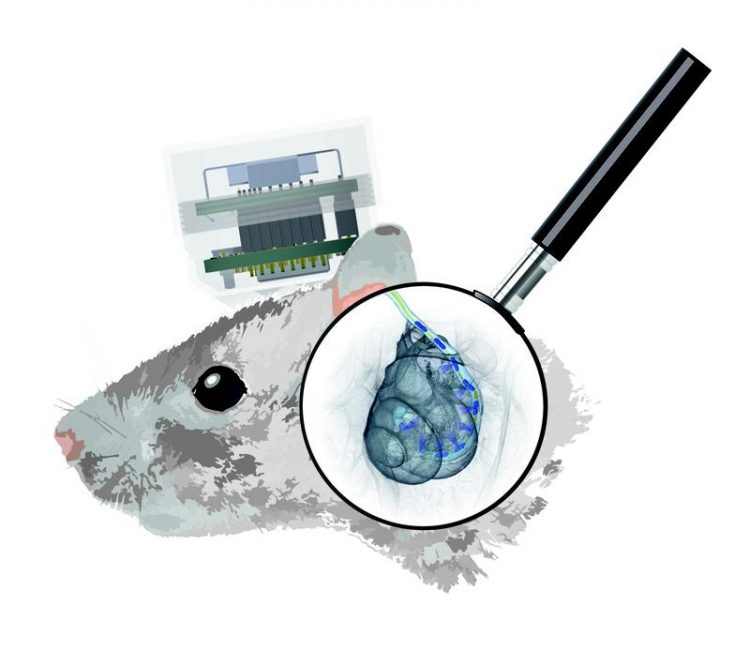 The cochlear implant (CI) enables worldwide over 700,000 people with profoundly reduced hearing and deaf people to hear again. So far, the auditory nerve has been stimulated by electrical impulses.

The quality of this artificial hearing differs greatly from natural hearing. Due to the extensive current propagation in the cochlea, large groups of nerve cells are activated instead of just a few nerve cells – comparable to playing a piano with boxing gloves instead of individual fingers.

Patients with CIs are able to communicate in 1-on-1 conversations, but are often dependent on lip-reading in environments with background noise and multiple speakers.

Further, music appreciation is limited. A fundamental improvement is promised by the targeted stimulation of the auditory nerve with light.

After 12 years of research on fundamental questions of hearing with light, the hear-ing research on the Göttingen Campus by Prof. Dr. Tobias Moser, Director of the Institute for Auditory Neuroscience at the University Medical Center Göttingen (UMG), is on the way to develop an optical cochlear implant towards clinical ap-plicability.

In cooperation with a team of engineers from the Department of Mi-crosystems Enigineering (IMTEK) at the University of Freiburg, led by Dr. Patrick Ruther, an optical cochlear implant system with integrated micro light-emitting diodes (µLEDs) was developed, which is suitable for long-term studies.

This system optically stimulates the auditory nerve in the animal model of human hearing loss, which has been previously made light-sensitive by genetic manipulation. The system is much smaller and lighter than the clinically used CI, and can therefore also be used in rodents.

The scientists have now gone an important step forward: in behavioral experiments they could show that the multichannel optical CI enables deaf rodents to hear again – and this over a period of weeks. The research findings were published on July 22, 2020 in the renowned journal “Science Translational Medicine”.

For the first time, the functionality of the newly developed optical cochlear implants comprising up to 10 µLEDs with an edge length of only 0.25 millimeters could be tested in animal models over a period of more than one month: Prior to the experiments, the rodents were injected with a harmless virus to make their auditory nerve light-sensitive via molecular light switches (channelrhodopsins).

With the help of acoustic stimuli, the animals were trained on behavioural task, then deafened by means of an ototoxic drug, and provided with an optical CI.

“Surprisingly, some deaf animals immediately transferred the light signal over the sound stimulus used for training prior to deafening. This could indicate that the optical stimulation comes close to the natural hearing impression,” says Dr. Daniel Keppeler, one of the first authors of the publication and staff member at the Institute for Auditory Neuroscience, UMG.

To achieve this milestone of the optical CI development, the LED probes had to be well encapsulated, which is the only way to protect the sensitive electronic components from the saline solution in the cochlea.

“The greatest challenge for us is the encapsulation of the implants. This is crucial for their long-term stability in the animal model,” said Dr. Michael Schwärzle, first author and former employee at the Department of Microsystems Engineering at the University of Freiburg.

The development of a mobile processor at the Institute for Auditory Neuroscience in Göttingen has been equally important for the success of behavioural experiments running over several weeks. The small computing unit converts ambient sound into electrical signals via an integrated microphone and transmits them to the optical CI.

The miniaturization of the optical cochlear implant for testing in rodents was another challenge for the interdisciplinary team of scientists. To be worn by the animals without any problems in behavioural experiments, the system should be as light as possible. The entire CI just weighs 15 grams, which corre-sponds to about a tablespoon of sugar.

This study marks important progress on the way to the optical CI as future medical device. Future challenges lie in increasing the number of channels as well as in refinement towards even better long-term stability and safety. “With regard to long-term stability, the electrical CI is a strong benchmark to meet,” says Dr. Tamas Harzcos, first author and scientist at the Institute for Auditory Neuroscience in Göttingen, UMG.

“In the process of the interdisciplinary development, it was very helpful to be on site as a team of engineers during the implantation tests, thus being directly involved. This cooperation gave us new insights into the biomedical environment, which strongly supported the technical development. We found a common language between medical doctors and technologists, and learned a lot from each other,” said Dr. Patrick Ruther, senior author and head of a research group at the Department of Microsystems Enigineering at the University of Freiburg.

“The development of gene therapy and optical CIs for clinical application is a huge challenge for us and colleagues worldwide that can only be overcome in multidisciplinary cooperation,” said Prof. Dr. Moser, senior author of the publication and spokesperson of the Multiscale Bioimaging Excellence Cluster (MBExC) and the Collaborative Research Centre 889 at the UMG.

Research on the optical CI has been extensively funded by the German Federal Ministry of Education and Research, the European Research Council and the German Research Foundation. For the purpose of preparing the clinical study Tobias Moser, Daniel Keppeler and other colleagues have founded the Göttingen-based company OptoGenTech as a spin-off from the University Medical Center Göttingen.

Background: Hearing with cochlear implants – with electricity and with light

According to the World Health Organization (WHO), the number of people with hearing loss and deafness will increase by 52 percent to a total of 900 million by 2050. A causal therapeutic approach for the inner ear does not exist so far.

Patients with severe hearing loss or even deafness can currently be helped with electric Cochlear Implants (CI). The CI is an implantable hearing prosthesis that picks up ambient sounds via an external speech processor, converts them, and transmits them to implanted electrodes in the cochlea. This bypasses the defective or non-existent hair cells, and directly stimulates the auditory nerve cells with electrical impulses.

The signal is then processed along the auditory pathway to the cortex. One problem in hearing arises from the electrical stimulation in the saline-filled cochlea: despite many efforts, the current cannot be sufficiently limited in space. Thus, many nerve cells that are responsible for a wide range of pitches are simultaneously electrically stimulated. The number of independent stimulation channels is typically limited to less than ten.

Stimulation with directed light promises to stimulate the auditory nerve in a more frequency selective manner. This requires the introduction of virus particles into the cochlea, which introduce a molecular light switch into the auditory nerve cells.

This switch can be activated by weak light pulses, thereby imitating the function of the hair cells. In the future, this could enable CI users to differentiate more precisely between pitches, thus enabling them to understand speech in noisy environments, and enjoy music to a greater extent.

The Göttingen Cluster of Excellence Multiscale Bioimaging: From Molecular Machines to Networks of Excitable Cells (MBExC) is funded since January 2019 in the framework of the Excellence Strategy of the German Federal and State Governments. Applying a unique and multiscale approach, MBExC investigates the disease-relevant functional units of electrically active cells of heart and brain, from the molecular to the organ level.

The MBExC unites numerous partners from the university and extra-university institutions in Göttingen. The overall goal: to under-stand the relationship between heart and brain diseases, to link basic and clinical research, and thus to develop new therapeutic and diagnostic approaches with social implications.