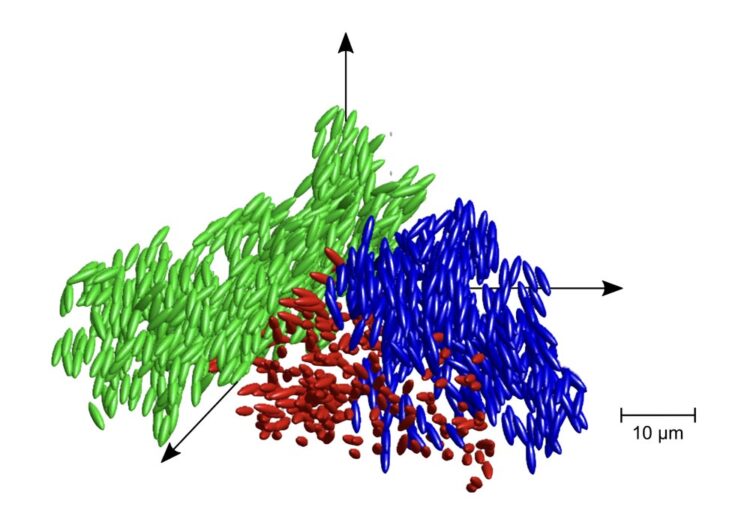 Image of the position and orientation of ellipsoidal particles in clusters of a liquid glass.
Credit: Research groups of Professor Andreas Zumbusch and Professor Matthias Fuchs

While glass is a truly ubiquitous material that we use on a daily basis, it also represents a major scientific conundrum. Contrary to what one might expect, the true nature of glass remains something of a mystery, with scientific inquiry into its chemical and physical properties still underway. In chemistry and physics, the term glass itself is a mutable concept: It includes the substance we know as window glass, but it may also refer to a range of other materials with properties that can be explained by reference to glass-like behaviour, including, for instance, metals, plastics, proteins, and even biological cells.

While it may give the impression, glass is anything but conventionally solid. Typically, when a material transitions from a liquid to a solid state the molecules line up to form a crystal pattern. In glass, this does not happen. Instead, the molecules are effectively frozen in place before crystallization happens. This strange and disordered state is characteristic of glasses across different systems and scientists are still trying to understand how exactly this metastable state forms.

Research led by professors Andreas Zumbusch (Department of Chemistry) and Matthias Fuchs (Department of Physics), both based at the University of Konstanz, has just added another layer of complexity to the glass conundrum. Using a model system involving suspensions of tailor-made ellipsoidal colloids, the researchers uncovered a new state of matter, liquid glass, where individual particles are able to move yet unable to rotate – complex behaviour that has not previously been observed in bulk glasses. The results are published in the Proceedings of the National Academy of Sciences of the United States of America (PNAS) (date of publication: 19 January 2021; published online: 4 January 2021).

Colloidal suspensions are mixtures or fluids that contain solid particles which, at sizes of a micrometre (one millionth of a metre) or more, are bigger than atoms or molecules and therefore well-suited to investigation with optical microscopy. They are popular among scientists studying glass transitions because they feature many of the phenomena that also occur in other glass-forming materials.

To date, most experiments involving colloidal suspensions have relied on spherical colloids. The majority of natural and technical systems, however, are composed of non-spherical particles. Using polymer chemistry, the team led by Andreas Zumbusch manufactured small plastic particles, stretching and cooling them until they achieved their ellipsoid forms and then placed them in a suitable solvent. “Due to their distinct shapes our particles have orientation – as opposed to spherical particles – which gives rise to entirely new and previously unstudied kinds of complex behaviours”, explains Zumbusch, who is a professor of physical chemistry and senior author on the study.

The researchers then went on to change particle concentrations in the suspensions, and tracked both the translational and rotational motion of the particles using confocal microscopy. Continues Zumbusch: “At certain particle densities orientational motion froze whereas translational motion persisted, resulting in glassy states where the particles clustered to form local structures with similar orientation”. What the researchers have termed liquid glass is a result of these clusters mutually obstructing each other and mediating characteristic long-range spatial correlations. These prevent the formation of a liquid crystal which would be the globally ordered state of matter expected from thermodynamics.

What the researchers observed were in fact two competing glass transitions – a regular phase transformation and a nonequilibrium phase transformation – interacting with each other. “This is incredibly interesting from a theoretical vantage point”, comments Matthias Fuchs, professor of soft condensed matter theory at the University of Konstanz and the other senior author on the paper. “Our experiments provide the kind of evidence for the interplay between critical fluctuations and glassy arrest that the scientific community has been after for quite some time”. A prediction of liquid glass had remained a theoretical conjecture for twenty years.

The results further suggest that similar dynamics may be at work in other glass-forming systems and may thus help to shed light on the behaviour of complex systems and molecules ranging from the very small (biological) to the very big (cosmological). It also potentially impacts the development of liquid crystalline devices.

The research was initiated as part of the University of Konstanz’s Collaborative Research Centre (CRC) 1214 “Anisotropic Particles as Building Blocks: Tailoring Shape, Interactions and Structures”, which was funded by the German Research Foundation (DFG) from 2016 to 2020.

Caption: Image of the position and orientation of ellipsoidal particles in clusters of a liquid glass.
Image credit: Research groups of Professor Andreas Zumbusch and Professor Matthias Fuchs