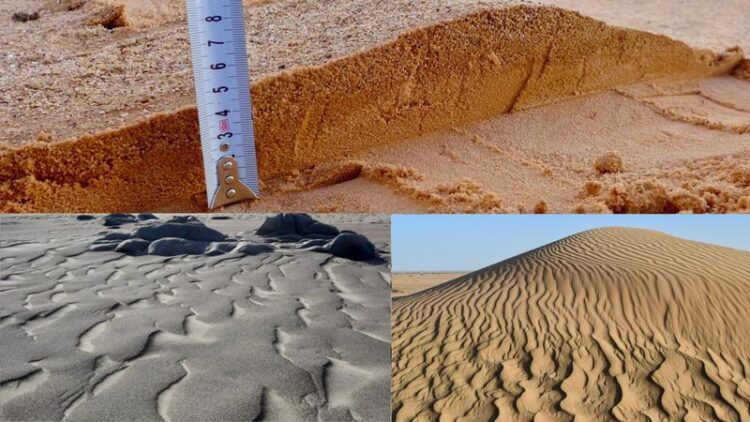 It’s all in the mix: In megaripples in sand deserts (bottom), the composition of coarse and fine grains of sand (top) varies depending on the wind. For the first time, researchers have demonstrated a universal grain-size ratio hidden in that composition.
Photo: Hezi Yizhaq/Klaus Kroy

An interdisciplinary team including researchers from Leipzig University has analysed an extensive collection of sand samples from so-called megaripple fields around the world and gained new insights into the composition of these sand waves. These could help settle debates about the mechanistic origin of some recently discovered enigmatic extraterrestrial sand structures and improve our ability to infer information about past weather and climate events from sediment records. The results of their investigations have just been published in the renowned journal Nature Communications.

Megaripples are sand waves with wavelengths in the metre range, between ordinary beach ripples (centimetres) and dunes (ten to 100 metres). They are commonly found on earth and Mars. Their sand consists of a unique mixture of coarse and fine grains. “This mixture always looks similar, but is never identical because of the turbulent winds,” explained Professor Klaus-Dieter Kroy of the Institute of Theoretical Physics at Leipzig University, one of the study’s leaders.

Among this diversity, the interdisciplinary team of geomorphologists and physicists from three universities in Germany, Israel and China has now discovered an unexpectedly uniform characteristic of the underlying sand transport process, one that had previously eluded decades of field studies. In their analysis of sand sample data from around the world, the researchers compared the frequencies of all sizes of shifting grains and divided the diameter of the coarsest grains and of the rarest fine grains for each sample. A surprisingly consistent number emerged, as Kroy pointed out.
That number can now be used to decide more reliably which category newly discovered sand ripples belong to – as predicted by the team’s theoretical calculations – and by which physical transport process they were formed.

The international team also hopes that its discovery could help in the future to better explain the formation of some mysterious new sand waves recently observed on Mars. Katharina Tholen, a doctoral researcher at Leipzig University and lead author of the study, said: “If we were able to use prevailing atmospheric conditions to explain the origin and migration of terrestrial and extraterrestrial sand waves, this would be an important step. It might then be possible to evaluate the sand structures we are currently observing, for example on Mars or in fossils and remote locations on earth, as complex archives of past climatic conditions.”