Focusing light on the nanoscale: Making nanolenses from metallic particles and DNA 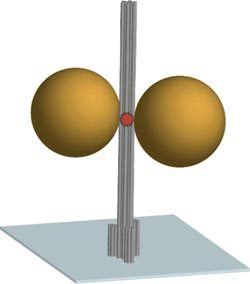 The sketch shows the DNA origami nanopillar (in gray) immobilized on a coverslip. Two gold nanoparticles of 80-100 nm diameter serve as nanoantenna and focus the light in the hotspot between the nanoparticles. A fluorescence dye as active optical source attached in the hotspots reports on the fluorescence enhancement.<br>TU Braunschweig<br>

This constrain arises from an effect called diffraction, inherent to all conventional lenses, and represents an obstacle for the development of nanotechnology applications.

The interdisciplinary group of scientists of Prof. Dr. Philip Tinnefeld have overcome this problem by an elegant self-assembly technique that produces millions of nanolenses on the basis of metallic nanoparticles in combination with DNA structures. These nanolenses enable ~100fold more sensitive detection of even single molecules than previous approaches.

The original publication is presented in the current issue of the scientific journal “SCIENCE”.

In the emerging field of nanophotonics scientist study the behavior of light at subwavelength dimensions. It is known, for example, that a pair of gold nanoparticles can focus light to a spot ~1000fold smaller than conventional lenses. Such tight focusing has great technological potential, e.g. for nanoscale signal processing in optical computers, for ultra-sensitive detection in diagnostics as well as for biotechnological applications such as DNA sequencing. It has, however, been a challenge to place gold nanoparticles of 80-100 nm dimensions at a defined distance and to bring molecules of interest in the hotspot between the particles.

To overcome the limitations, a group of scientist led by Prof. Dr. Philip Tinnefeld at Technische Universität Braunschweig have developed nanolenses by self-assembly. Therefore, they used DNA as a construction material that was folded into the shape of a nanopillar by a technique called DNA origami (see sketch). This DNA nanopillar served as a scaffold to which the nanoparticles were attached. The DNA origami was further modified to attach functionality. Specific molecules at the bottom of the nanopillar allowed placing it upright on a cover slip. Further attachment sites between the nanoparticles were used to attach optical sources such as a fluorescent dye. Biocompatibility of the nanooptical devices was proven by the single-molecule detection of short nucleic acid diffusing in the solution. The functioning of the self-assembled nanolens was demonstrated by a drastic fluorescence enhancement by a factor of ~100 for single fluorescent molecules.

The scientists are confident that their technique might have an impact on a broad range of research disciplines. Prof. Dr. Philip Tinnefeld describes the extent of the possible applications enabled by their findings: “Concentrating the light into very reduced volume in the zeptoliter range allows us to perform studies on individual objects with better signals and at higher concentrations where biologically relevant processes like DNA replication occur. Additionally, we can now investigate how light interacts with nanoparticles, a key component for the field of nanophotonics”.

This work was funded by the European Research Council (ERC), the Volkswagen Foundation and the Center for NanoScience CeNS.