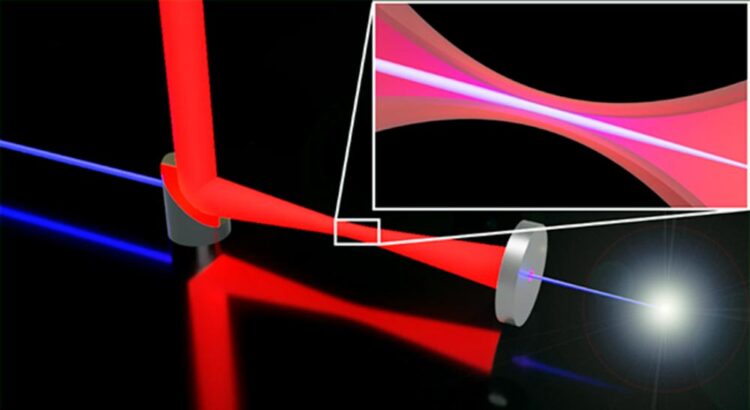 Electron microscopy enables researchers to visualize tiny objects such as viruses, the fine structures of semiconductor devices, and even atoms arranged on a material surface. Focusing down the electron beam to the size of an atom is vital for achieving such high spatial resolution. However, when the electron beam passes through an electrostatic or magnetic lens, the rays of electrons exhibit different focal positions depending on the focusing angle and the beam spreads out at the focus. Correcting this “spherical aberration” is costly and complex, meaning that only a select few scientists and companies possess electron microscopes with atomic resolution.

Researchers from Tohoku University have proposed a new method to form an electron lens that uses a light field instead of the electrostatic and magnetic fields employed in conventional electron lenses. A ponderomotive force causes the electrons traveling in the light field to be repelled from regions of high optical intensity. Using this phenomenon, a doughnut-shaped light beam placed coaxially with an electron beam is expected to produce a lensing effect on the electron beam.

The researches theoretically assessed the characteristics of the light-field electron lens formed using a typical doughnut-shaped light beam – known as a Bessel or Laguerre-Gaussian beam. From there, they obtained a simple formula for focal length and spherical aberration coefficients which allowed them to determine rapidly the guiding parameters necessary for the actual electron lens design.

“The light-field electron lens has unique characteristics not seen in conventional electrostatic and magnetic electron lenses,” says Yuuki Uesugi, assistant professor at the Institute of Multidisciplinary Research for Advanced Materials at Tohoku University and lead author of the study. “The realization of light-based aberration corrector will significantly reduce installation costs for electron microscopes with atomic resolution, leading to their widespread use in diverse scientific and industrial fields,” adds Uesugi.

Looking ahead, Uesugi and colleagues are exploring ways for the practical application of next-generation electron microscopes using the light-field electron lens.