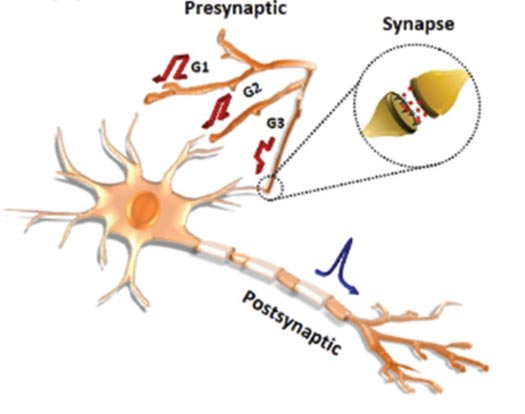 Schematic of biological presynaptic and postsynaptic neurons and a synapse (inset)
Credit: Korea Institute of Science and Technology(KIST)

Transistors with a fibrous architecture similar to those of neurons are capable of forming artificial neural networks. Fibrous networks can be used in smart wearable devices and robots.

Advances in artificial intelligence (AI)-based technologies have led to an astronomical increase in the amounts of data available for processing by computers. Existing computing methods often process data sequentially and therefore have large time and power requirements for processing massive quantities of information. Hence, a transition to a new computing paradigm is required to solve such challenging issues. Researchers are currently working towards developing energy-efficient neuromorphic computing technologies and hardware that are capable of processing massive amounts of information by mimicking the structure and mechanisms of the human brain.

The Korea Institute of Science and Technology (KIST) has reported that a research team led by Dr. Jung ah Lim and Dr. Hyunsu Ju of the Center for Opto-electronic Materials and Devices has successfully developed organic neurofiber transistors with an architecture and functions similar to those of neurons in the human brain, which can be used as a neural network. Research on devices that can function as neurons and synapses is needed so that large-scale computations can be performed in a manner similar to data processing in the human brain. Unlike previously developed devices that act as either neurons or synapses, the artificial neurofiber transistors developed at KIST can mimic the behaviors of both neurons and synapses. By connecting the transistors in arrays, one can easily create a structure similar to a neural network.

Biological neurons have fibrous branches that can receive multiple stimuli simultaneously, and signal transmissions are mediated by ion migrations stimulated by electrical signals. The KIST researchers developed the aforementioned artificial neurofibers using fibrous transistors previously developed by them in 2019. They devised memory transistors that remember the strengths of the applied electrical signals, similar to synapses, and transmit them via redox reactions between the semiconductor channels and ions within the insulators upon receiving the electrical stimuli from the neurofiber transistors. These artificialneurofibers also mimic the signal summation functionality of neurons.

The research was backed by the Ministry of Science and ICT and conducted as part of a institutional research program of KIST and the National Research Foundation of Korea’s mid-career Researcher Program. This study has been published in the latest issue of Advanced Materials (IF : 27.34, JCR top 1.61%).