Towards the achievement of megatesla magnetic fields in the laboratory 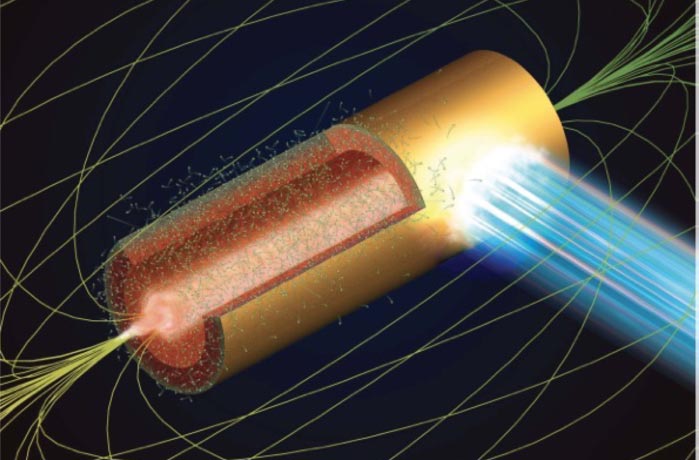 Illustration of a microtube implosion. Due to the laser-produced hot electrons with megaelectron volt energies, cold ions in the inner wall surface implode toward the central axis. By pre-seeding uniform magnetic fields of the kilotesla order, the Lorentz force induces a Larmor gyromotion of the imploding ions and electrons. Due to the resultant collective motion of relativistic charged particles around the central axis, strong spin currents of approximately peta-ampere/cm^2 are produced with a few tens of nm size, generating megatesla-order magnetic fields.
Credit: Masakatsu Murakami

Recently, a research team at Osaka University has successfully demonstrated the generation of megatesla (MT)-order magnetic fields via three-dimensional particle simulations on laser-matter interaction. The strength of MT magnetic fields is 1-10 billion times stronger than geomagnetism (0.3-0.5 G), and these fields are expected to be observed only in the close vicinity of celestial bodies such as neutron stars or black holes. This result should facilitate an ambitious experiment to achieve MT-order magnetic fields in the laboratory, which is now in progress.

Since the 19th century, scientists have strived to achieve the highest magnetic fields in the laboratory. To date, the highest magnetic field observed in the laboratory is in the kilotesla (kT)-order. In 2020, Masakatsu Murakami at Osaka University proposed a novel scheme called microtube implosions (MTI) [1, 2] to generate ultrahigh magnetic fields on the MT-order. Irradiating a micron-sized hollow cylinder with ultraintense and ultrashort laser pulses generates hot electrons with velocities close to the speed of light. Those hot electrons launch a cylindrically symmetric implosion of the inner wall ions towards the central axis. An applied pre-seeded magnetic field of the kilotesla-order, parallel to the central axis, bends the trajectories of ions and electrons in opposite directions because of the Lorentz force. Near the target axis, those bent trajectories of ions and electrons collectively form a strong spin current that generates MT-order magnetic fields.

In this study, one of the team members, Didar Shokov, has extensively conducted three-dimensional simulations using the supercomputer “OCTOPUS” at Osaka University’s Cybermedia Center. As a result, a distinct scaling law has been found relating the performance of the generation of the magnetic fields by MTI and such external parameters as applied laser intensity, laser energy, and target size.

“Our simulation showed that ultrahigh megatesla magnetic fields, which were thought to be impossible to realize on earth, can be achieved using today’s laser technology. The scaling law and detailed temporal behavior of the magnetic fields in the target are expected to facilitate laboratory experiments using the Peta-watt laser system ‘LFEX’ at Osaka University’s Institute of Laser Engineering, which are now in progress,” Murakami says.

The article, “Laser scaling for generation of megatesla magnetic fields by microtube implosions” was published in High Power Laser Science and Engineering at DOI: https://doi.org/10.1017/hpl.2021.46