The power of randomization: Magnetic skyrmions for novel computer technology 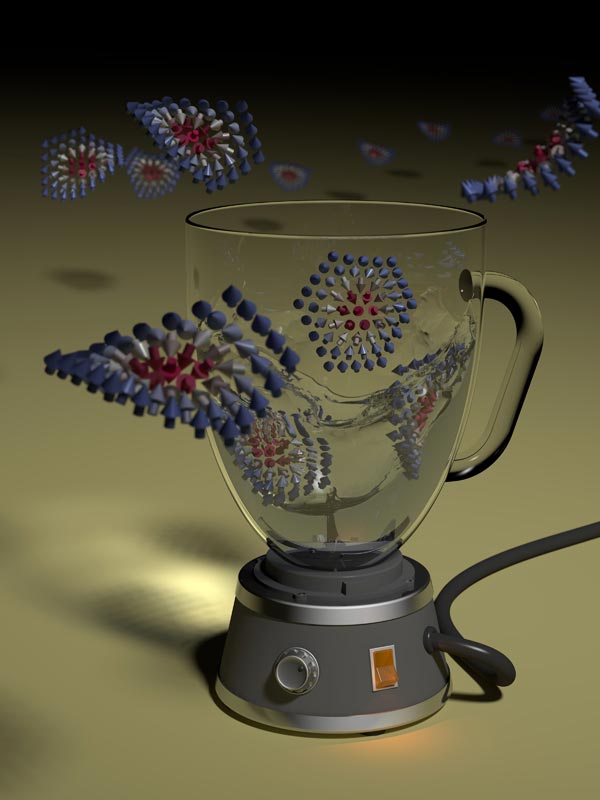 The reshuffler basically works as a skyrmion blender: a specific initial sequence is entered and the result is a randomly reshuffled sequence of output states. ill./©: Andreas Donges, University of Konstanz

Researchers at Johannes Gutenberg University Mainz (JGU) have succeeded in developing a key constituent of a novel unconventional computing concept. This constituent employs the same magnetic structures that are being researched in connection with storing electronic data on shift registers known as racetracks.

In this, researchers investigate so-called skyrmions, which are magnetic vortex-like structures, as potential bit units for data storage.

However, the recently announced new approach has a particular relevance to probabilistic computing. This is an alternative concept for electronic data processing where information is transferred in the form of probabilities rather than in the conventional binary form of 1 and 0. The number 2/3, for instance, could be expressed as a long sequence of 1 and 0 digits, with 2/3 being ones and 1/3 being zeros.

The key element lacking in this approach was a functioning bit reshuffler, i.e., a device that randomly rearranges a sequence of digits without changing the total number of 1s and 0s in the sequence. That is exactly what the skyrmions are intended to achieve. The results of this research have been published in the journal Nature Nanotechnology.

The researchers used thin magnetic metallic films for their investigations. These were examined in Mainz under a special microscope that made the magnetic alignments in the metallic films visible. The films have the special characteristic of being magnetized in vertical alignment to the film plane, which makes stabilization of the magnetic skyrmions possible in the first place.

Skyrmions can basically be imagined as small magnetic vortices, similar to hair whorls. These structures exhibit a so-called topological stabilization that protects them from collapsing too easily – as a hair whorl resists being easily straightened.

It is precisely this characteristic that makes skyrmions very promising when it comes to use in technical applications such as, in this particular case, information storage. The advantage is that the increased stability reduces the probability of unintentional data loss and ensures the overall quantity of bits is maintained.

The reshuffler receives a fixed number of input signals such as 1s and 0s and mixes these to create a sequence with the same total number of 1 and 0 digits, but in a randomly rearranged order. It is relatively easy to achieve the first objective of transferring the skyrmion data sequence to the device, because skyrmions can be moved easily with the help of an electric current.

However, the researchers working on the project now have for the first time managed to achieve thermal skyrmion diffusion in the reshuffler, thus making their exact movements completely unpredictable. It is this unpredictability, in turn, which made it possible to randomly rearrange the sequence of bits while not losing any of them. This newly developed constituent is the previously missing piece of the puzzle that now makes probabilistic computing a viable option.

“There were three aspects that contributed to our success. Firstly, we were able to produce a material in which skyrmions can move in response to thermal stimuli only. Secondly, we discovered that we can envisage skyrmions as particles that move in a fashion similar to pollen in a liquid. And ultimately, we were able to demonstrate that the reshuffler principle can be applied in experimental systems and used for probability calculations.

The research was undertaken in collaboration between various institutes and I am pleased I was able to contribute to the project,” emphasized Dr. Jakub Zázvorka, lead author of the publication. Zázvorka conducted his research into skyrmion diffusion as a research associate in the team headed by Professor Mathias Kläui and is meanwhile working at Prague University.

“It is very interesting that our experiments were able to demonstrate that topological skyrmions are a suitable system for investigating not only problems relating to spintronics, but also to statistical physics. Thanks to the MAINZ Graduate School of Excellence, we were able to bring together different fields of physics here that so far usually work on their own, but that could clearly benefit from working together.

I am particularly looking forward to future collaboration in the field of spin structures with the Theoretical Physics teams at Mainz University that will feature our new TopDyn – Dynamics and Topology Center,” emphasized Mathias Kläui, Professor at the Institute of Physics at JGU and Director of the Graduate School of Excellence Materials Science in Mainz (MAINZ).

“We can see from this work that the field of spintronics offers interesting new hardware possibilities with regard to algorithmic intelligence, an emerging phenomenon also being investigated at the recently founded JGU Emergent Algorithmic Intelligence Center,” added Dr. Karin Everschor-Sitte, a member of the research center's steering committee and head of the Emmy Noether research group TWIST at the JGU Institute of Physics.

Image:
http://www.uni-mainz.de/bilder_presse/08_physik_komet_skyrmion_bit_reshuffler.jp…
The reshuffler basically works as a skyrmion blender: a specific initial sequence is entered and the result is a randomly reshuffled sequence of output states.
ill./©: Andreas Donges, University of Konstanz