Stanford discovery could pave the way to ultrafast, energy-efficient computing 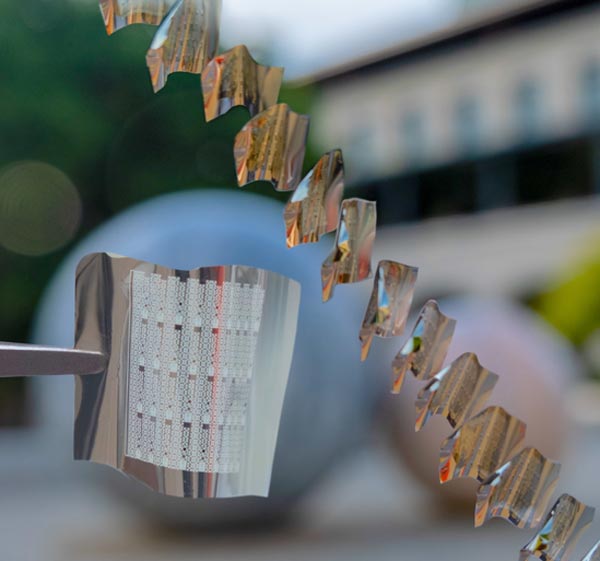 A flexible phase-change memory substrate held by tweezers (left) with a diagonal sequence showing substrates in the process of being bent.
Credit: Crystal Nattoo

Scientists have spent decades searching for faster, more energy-efficient memory technologies for everything from large data centers to mobile sensors and other flexible electronics. Among the most promising data storage technologies is phase-change memory, which is thousands of times faster than conventional hard drives but uses a lot of electricity.

Now, Stanford University engineers have overcome a key obstacle that has limited widespread adoption of phase-change memory. The results are published in a Sept. 10 study in Science.

“People have long expected phase-change memory to replace much of the memory in our phones and laptops,” said Eric Pop, a professor of electrical engineering and senior author of the study. “One reason it hasn’t been adopted is that it requires more power to operate than competing memory technologies. In our study, we’ve shown that phase-change memory can be both fast and energy efficient.”

Unlike conventional memory chips built with transistors and other hardware, a typical phase-change memory device consists of a compound of three chemical elements – germanium, antimony and tellurium (GST) – sandwiched between two metal electrodes.

“A typical phase-change memory device can store two states of resistance: a high-resistance state 0, and a low-resistance state 1,” said doctoral candidate Asir Intisar Khan, co-lead author of the study. “We can switch from 1 to 0 and back again in nanoseconds using heat from electrical pulses generated by the electrodes.”

“This large resistance change is reversible and can be induced by switching the electrical pulses on and off,” said Khan.

“You can come back years later and read the memory just by reading the resistance of each bit,” Pop said. “Also, once the memory is set it doesn’t use any power, similar to a flash drive.”

But switching between states typically requires a lot of power, which could reduce battery life in mobile electronics.

To address this challenge, the Stanford team set out to design a phase-change memory cell that operates with low power and can be embedded on flexible plastic substrates commonly used in bendable smartphones, wearable body sensors and other battery-operated mobile electronics.

“These devices require low cost and low energy consumption for the system to work efficiently,” said co-lead author Alwin Daus, a postdoctoral scholar. “But many flexible substrates lose their shape or even melt at around 390 F (200 C) and above.”

In the study, Daus and his colleagues discovered that a plastic substrate with low thermal conductivity can help reduce current flow in the memory cell, allowing it to operate efficiently.

“Our new device lowered the programming current density by a factor of 10 on a flexible substrate and by a factor of 100 on rigid silicon,” Pop said. “Three ingredients went into our secret sauce: a superlattice consisting of nanosized layers of the memory material, a pore cell – a nanosized hole into which we stuffed the superlattice layers – and a thermally insulating flexible substrate. Together, they significantly improved energy efficiency.”

The ability to install fast, energy-efficient memory on mobile and flexible devices could enable a wide range of new technologies, such as real-time sensors for smart homes and biomedical monitors.

“Sensors have high constraints on battery lifetime, and collecting raw data to send to the cloud is very energy inefficient,” Daus said. “If you can process the data locally, which requires memory, it would be very helpful for implementing the Internet of Things.”

Phase-change memory could also usher in a new generation of ultrafast computing.

“Today’s computers have separate chips for computing and memory,” Khan said. “They compute data in one place and store it in another. The data have to travel back and forth, which is highly energy inefficient.”

Phase-change memory could also be used in large data centers, where data storage accounts for about 15 percent of electricity consumption.

“The big appeal of phase-change memory is speed, but energy-efficiency in electronics also matters,” Pop said. “It’s not just an afterthought. Anything we can do to make lower-power electronics and extend battery life will have a tremendous impact.”