Home / Information Technology / Skyrmions like it hot: Spin structures are controllable even at high temperatures
14.02.2020

Skyrmions like it hot: Spin structures are controllable even at high temperatures 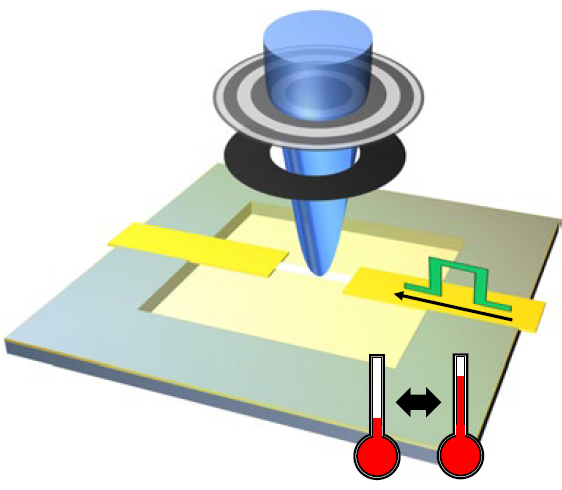 The researchers observed the magnetic skyrmions in an x-ray microscope on a sample of adjustable temperature. ill./©: Kai Litzius

The joint research project of Johannes Gutenberg University Mainz (JGU) and the Massachusetts Institute of Technology (MIT) that had previously demonstrated the use of new spin structures for future magnetic storage devices has yet achieved another milestone.

The new insights published in Nature Electronics shed light on the effects of temperature on the dynamics of skyrmions. According to the researchers' findings, skyrmions move more efficiently at higher temperatures and their trajectories only depend on the speed of the skyrmions. This makes device design significantly easier.

The teams at JGU and MIT observed billionfold reproducible motion of skyrmions, a new topologically stabilized spin structure that is a promising candidate to be used as data bits in the racetrack device.

The latest experiments were carried out in thin films of magnetic material that stabilize skyrmions at and above room temperature, which is a feature that is required for any application. As it turned out, there currently are limits to the speed of a skyrmion caused by its deformations that will need to be overcome, possibly in antiferromagnetic materials.

“This is a great moment as we have worked for a long time to get this study completed. Now that we know that skyrmions can be moved billionfold and at high temperatures that are typical for the insides of a computer, we can focus on tackling the high-speed regime and get the device from its experimental state to being superior to existing storage technology,” said Dr. Kai Litzius, lead author of the article.

Litzius conducted this work at Johannes Gutenberg University Mainz, combined with a research stay at MIT. After finishing his PhD, he moved to the United States to work at MIT as a postdoctoral associate.

Cooperation with leading international partners as the cornerstone of successful research

“I am very happy to see the next step taken for using skyrmions as magnetic bits in novel devices. The international collaboration with leading partner universities is crucial to enable such work and such collaborations, and exchanges of people are a cornerstone of our graduate education programs,” emphasized Professor Mathias Kläui, corresponding author of the paper.

“With funding from the German Academic Exchange Service, the Collaborative Research Center CRC/TRR 173 Spin+X, and the Graduate Programs MAINZ – Materials Science in Mainz and MPGC – Max Planck Graduate Center with Johannes Gutenberg University Mainz, we foster these collaborations and exchanges that can be the stepping stone for the next career step.”

Funding for the MAINZ Graduate School was approved in the 2007 German Excellence Initiative. In the second round in 2012, MAINZ was awarded further funding for another five years. One of its core research fields was spintronics, a field of research in which collaboration with leading international partners plays an important role. In 2019, the MAINZ Graduate School merged with the Max Planck Graduate Center with Johannes Gutenberg University Mainz (MPGC).

Image:
https://download.uni-mainz.de/presse/08_physik_komet_skyrmion_temperatur.jpg
The researchers observed the magnetic skyrmions in an x-ray microscope on a sample of adjustable temperature.
ill./©: Kai Litzius