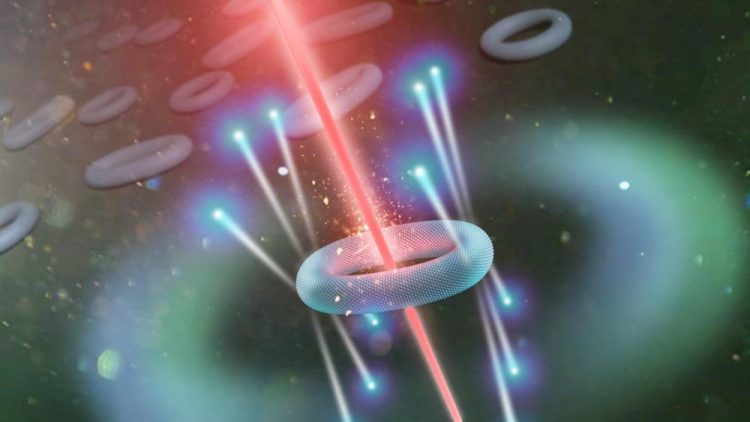 This is an artistic rendering of semiconductor quantum rings being illuminated by a laser and emitting single photons. Credit: Argonne National Laboratory

Researchers at the Center for Nanoscale Materials (CNM), a U.S. Department of Energy (DOE) Office of Science User Facility located at DOE's Argonne National Laboratory, have contributed to a recently published Nature Communications paper that reports the cause behind a key quantum property of donut-like nanoparticles called “semiconductor quantum rings.”

This property may find application in quantum information storage, communication, and computing in future technologies.

In this project, the CNM researchers collaborated with colleagues from the University of Chicago, Ludwig Maximilian University of Munich, University of Ottawa and National Research Council in Canada.

The team assembled circular rings made out of cadmium selenide, a semiconductor that lends itself to growing donut-shaped nanoparticles. These quantum rings are two-dimensional structures — crystalline materials composed of a few layers of atoms. The advantage of semiconductors is that when researchers excite them with a laser, they emit photons.

The team observed this effect when breaking the perfect rotational symmetry of the donut shape, causing them to be slightly elongated. “By this symmetry breaking,” says Ma, “we can change the direction of light emission. We can thus control how photons come out of the donut and achieve coherent directional control.”

Because the photons in the light emits from these rings along a single direction, rather than spreading out in all directions, researchers can tune this emission to effectively collect single photons. With this control, researchers can integrate topology information into the photons, which can then be used as messengers for carrying quantum information. It may even be possible to exploit these encoded photons for quantum networking and computation.

“If we can gain even greater control over the fabrication process, we could make nanoparticles with different shapes such as a clover with multiple holes or a rectangle with a hole in the center,” noted Matthew Otten, a Maria Goeppert Mayer Fellow at Argonne's CNM. “Then, we might be able to encode more types of quantum information or more information into the nanoparticles.”

“I should add that geometry is not the only factor in causing this quantum effect. The atomistic structure of the material also counts, as is often the case in nanoscale materials,” said Ma.

This work was supported by the DOE Office of Science.