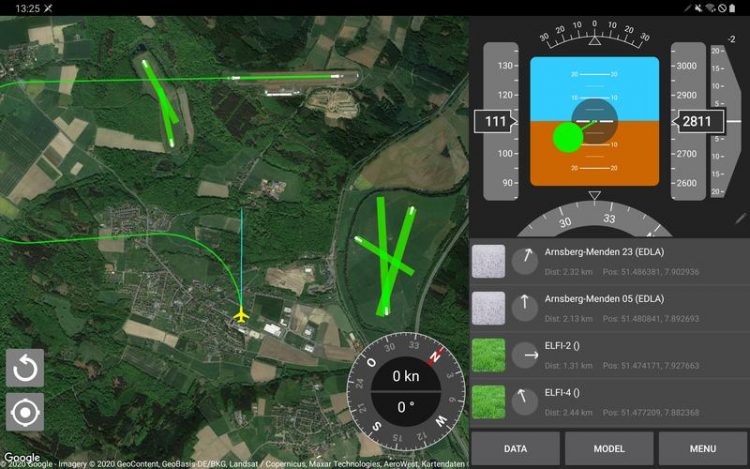 Safe2Land is already available on a Tablet PC FernUniversität in Hagen

A German aviation magazine honored the team of Wolfram Schiffmann, Professor of Computer Architecture at the FernUniversität in Hagen, for its emergency landing assistant ELA with its “Innovation Award”.

About 39.7 percent of the participating readers of the “aerokurier” voted in the “Special Aviation Award” for the “Engine-out Emergency Landing Assistant” developed in their institute – considerably more than for the second-placed development.

The editorial team chose innovations in a total of eight categories, which they believe have the potential to shape the future of general aviation.

“Whether due to a technical problem, a bird strike or lack of fuel: aircraft engines can always fail!” says Prof. Dr. Wolfram Schiffmann with great emphasis. The computer science professor at the FernUniversität is a passionated pilot and flight instructor in his spare time.

If the aircraft engine fails completely, the emergency landing assistance system developed in its computer architecture department can provide effective support for pilots. It determines a landing site that can be reached in gliding flight and helps to steer the non-powered machine down to the ground.

With a new approach to take the wind situation into account, the glide path calculation could be accelerated by a factor of approx. 1,000,000, so that even on a standard tablet PC only about a millionth of a second is needed per glide path.

In this way, all possible glide paths can be permanently determined and the best one selected in real time during flight. “Safe2Land” was successfully tested in a research flight simulator developed by the department itself as well as in real aircrafts. There are various applications for future aircrafts with single pilot operation (SPO), air taxis and unmanned air vehicles (UAV).

Glide to the runway without thrust

Not only single-engine airplanes are at risk of an engine failures, but even passenger planes (where the trend is moving away from four-engine to more economical twin-engine types). In such a case, the pilot must fly his non-powered machine like a glider to a suitable runway or emergency landing field and flare out in a controlled manner. Such a foolhardy but no alternative maneuver made Chesley “Sully” Sullenberger famous in 2009 when he steered his Airbus onto the Hudson River in New York with all engines out.

Such situations are pure stress for pilots. They have to make and implement exactly the right decisions within a very short time, often with insufficient information. However, many general conditions and influencing factors can often only be estimated.

The decision for one of several possible landing sites is extremely difficult. Prof. Dr. Wolfram Schiffmann: “It is often definite, there is only one attempt!” In addition, motorized aircrafts are not designed for gliding, their gliding characteristics differ significantly in turns and straight flight. In the case of slow-flying aircraft in particular, the current – often changing – wind situation must also be taken into account.

Find the optimal glide path to the landing area

The crew can be supported by rapid route planning using ELA. The emergency landing assistant calculates four glide paths for each runway close by and helps the pilots to find the optimal glide path to the landing area. If no suitable airport can be reached, a database with emergency landing sites can be accessed, which have been identified by means of ELFI.

A landing field should be within gliding reach and aligned opposite to the wind direction. In addition, it must be large enough for the aircraft, both in the direction of landing and across it. It should also be noted that the runway has no significant inclination in the longitudinal and transverse directions, which is unsuitable for the aircraft.

The pilots must strictly adhere to the computed glide path down to the emergency landing site so that the aircraft can touch down in the correct altitude, heading and landing speed at the beginning of the landing field. However, winds can have a difficult impact on the direction and speed of the aircraft, and gusts can even cause the aircraft to “stand across to the wind”.

However, ELA is able to permanently recalculate the glide path: “Our method models any wind configuration and calculates the optimized glide path in real time even in complex wind scenarios,” explains Schiffmann. “Previous methods based on cycloid curves, so-called trochoids, can only take into account a constant wind component.“

ELA obtains the geodata of the runways from a database created by ELFI. This emergency landing site finder uses highly accurate altitude data measured with LiDAR technology. LiDAR stands for “Light Detection and Ranging”, a proven measurement technology that works with laser beams – similar to a radar.

ELFI evaluates the three-dimensional surface model (digital surface model) and determines emergency landing areas that are suitable for the landing of the aircraft without thrust. In addition, the emergency landing fields are checked with satellite images using artificial neural networks and digital road maps, so that e.g. trenches in fields, roads or water surfaces cannot be classified as landing opportunities.

“For our highly complex calculations, we used computer systems with multi-core processors working in parallel, which later combine their partial results,” explains Wolfram Schiffmann. “Although we only sampled the altitude data for a limited number of landing directions and each checked whether the landing sites were suitable in terms of size and inclinations, huge amounts of data were generated. When determining emergency landing fields in the Hagen area alone, for example, gigabytes had to be evaluated.“

A FernUni’s student has integrated “Safe2Land” into an unmanned model airplane with a wingspan of 1.4 meters and a take-off weight of 1.5 kilograms in his master's thesis in the computer architecture institute. An integral part of his work is a controller he developed and which guides the aircraft along to the emergency runway planned by „Safe2Land”.

The final analysis of flight data from simulations and a real flight test demonstrated the high accuracy of the automated gliding flight. Even with simulated turbulence, the position on the final approach deviated less than 25 centimeters horizontally and less than five centimeters vertically from the pre-calculated values. And even during a real test flight, the flight model controlled by Safe2Land landed safely on a meadow.