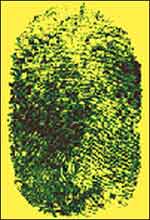 Computerized systems that automatically match fingerprints have become so sophisticated that the best of them are accurate more than 99 percent of the time, according to the most comprehensive known study of the systems ever conducted.

Computer scientists at the Commerce Department’s National Institute of Standards and Technology (NIST) tested 34 commercially available systems provided by 18 companies from around the world. NIST conducted the testing to evaluate the accuracy of fingerprint matching for identification and verification systems.

Researchers found that the number of fingers used and fingerprint quality affected the accuracy of the systems. Prints from additional fingers greatly improved accuracy, and the greatest gains were seen when graduating from a single finger to two fingers.

The Justice Management Division of the U.S. Department of Justice funded the study in connection with its efforts to integrate the fingerprint systems operated by the Federal Bureau of Investigation and the Department of Homeland Security.