How Many Squares, Mr. Franklin? 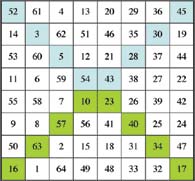 This is a magic square created by Benjamin Franklin

When he wasn’t experimenting with lightning or overthrowing the British Empire, Benjamin Franklin found time to fool around with mathematics, inventing a variant of the magic square called Franklin’s squares. Now Maya Ahmed, a mathematics graduate student at UC Davis, has come up with a way to construct both Franklin’s own squares and others of the same type. The methods could have applications in computer programming for business.

A regular magic square is a table of numbers in which any row, column or diagonal adds up to the same number. Mathematicians around the world have studied them for thousands of years.

Franklin himself created three such squares, two that are eight rows by eight columns and one of 16 by 16.

“No one knows how he did it,” Ahmed said. “They’re very hard to construct.”

Ahmed’s method turns what looks like an arithmetic problem into a geometry problem. The numbers in a Franklin square can be described by a series of equations — 127 equations for an eight-by-eight square. Those equations also describe a cone-shaped object in multiple (more than three) dimensions. That yields the basic elements of a Franklin square.

Using this method, Ahmed could both reconstruct Franklin’s three original squares and create new ones that obey the same rules. She was also able to work out the maximum possible number of eight-by-eight Franklin squares: just over 228 trillion.

Franklin regarded his squares as “incapable of useful application.” But Ahmed’s methods can also be used to find whole-number solutions to problems of linear equations. An example would be scheduling aircraft and crew members for an airline, De Loera said.

The paper is published in the May issue of the American Mathematical Monthly.