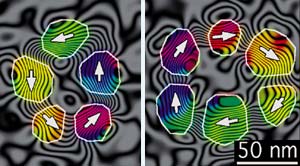 Shown are cobalt nanoparticles that have self-assembled into bracelet-like "nanorings." The rings’ magnetic flux can be oriented in one of two directions – clockwise or counterclockwise – a characteristic that could represent binary numbers in magnetic memory devices. Because the flux direction remains even without a constant power supply, it is possible these rings could lead to so-called "non-volatile" computer memory, which would not be wiped out in the event of a system failure. (Graphic/VCH Publishers) <br><br>

Recent nanotechnology research at Purdue University could pave the way toward faster computer memories and higher density magnetic data storage, all with an affordable price tag.

Just like the electronics industry, the data storage industry is on the move toward nanoscale. By shrinking components to below 1/10,000th the width of a human hair, manufacturers could make faster computer chips with more firepower per square inch. However, the technology for making devices in that size range is still being developed, and the smaller the components get, the more expensive they are to produce.

Purdue chemist Alexander Wei may have come up with a surprisingly simple and cheap solution to the shrinking data storage problem. Wei’s research team has found a way to create tiny magnetic rings from particles made of cobalt. The rings are much less than 100 nanometers across – an important threshold for the size-conscious computer industry – and can store magnetic information at room temperature. Best of all, these “nanorings” form all on their own, a process commonly known as self-assembly.

“The cobalt nanoparticles which form the rings are essentially tiny magnets with a north and south pole, just like the magnets you played with as a kid,” said Wei, who is an associate professor of chemistry in Purdue’s School of Science. “The nanoparticles link up when they are brought close together. Normally you might expect these to form chains, but under the right conditions, the particles will assemble into rings instead.”

The research appeared as a “Very Important Paper” in the November issue of the chemistry journal Angewandte Chemie. Wei collaborated with lead author Steven Tripp and Rafal Dunin-Borkowski, an electron microscopist at the University of Cambridge.

The magnetic dipoles responsible for nanoring formation also produce a collective magnetic state known as flux closure. There is strong magnetic force, or flux, within the rings themselves, stemming from the magnetic poles each particle possesses. But after the particles form rings, the net magnetic effect is zero outside. Tripp developed conditions leading to the self-assembly of the cobalt nanorings, then initiated a collaboration with Dunin-Borkowski to study their magnetic properties. By using a technique known as electron holography, the researchers were able to observe directly the flux-closure states, which are stable at room temperature.

“Magnetic rings are currently being considered as memory elements in devices for long-term data storage and magnetic random-access memory,” Wei said. “The rings contain a magnetic field, or flux, which can flow in one of two directions, clockwise or counterclockwise. Magnetic rings can thus store binary information, and unlike most magnets, the rings keep the flux to themselves. This minimizes crosstalk and reduces error during data processing.”

When you turn on your computer, it loads its operating system and whatever documents you are working on into its RAM, or random-access memory. RAM is fast, enabling your computer to make quick changes to whatever is stored there, but its chief drawback is its volatility – it cannot perform without a continuous supply of electricity. Many people have experienced the frustration of losing an unsaved document when their computer suddenly crashes or loses power, causing all the data stored in RAM to vanish.

“Nonvolatile memory based on nanorings could in theory be developed,” Wei said. ” For the moment, the nanorings are simply a promising development.”

Preliminary studies have shown that the nanorings’ magnetic states can be switched by applying a magnetic field, which could be used to switch a nanoring “bit” back and forth between 1 and 0. But according to Wei, perhaps the greatest potential for his group’s findings lay in the possibility of combining nanorings with other nanoscale structures.

“Integrating the cobalt nanorings with electrically conductive nanowires, which can produce highly localized magnetic fields for switching flux closure states, is highly appealing.” he said. “Such integration may be possible by virtue of self-assembly.”

Several research groups have created magnetic rings before but have relied on a “top-down” manufacturing approach, which imposes serious limitations on size reduction.

“The fact that cobalt nanoparticles can spontaneously assemble into rings with stable magnetic properties at room temperature is really remarkable,” Wei said. “While this discovery will not make nonvolatile computer memory available tomorrow, it could be an important step towards its eventual development. Systems like this could be what the data storage industry is looking for.”

Wei’s group is associated with the Birck Nanotechnology Center, which will be one of the largest university facilities in the nation dedicated to nanotechnology research when construction is completed in 2005. Nearly 100 groups associated with the center are pursuing research topics such as nanometer-sized machines, advanced materials for nanoelectronics and nanoscale biosensors.

Funding for Wei’s research was provided in part by the National Science Foundation and the Department of Defense.