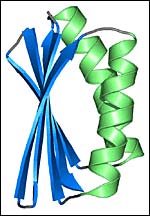 A computer-generated image of the artificial protein, Top7 <br>Image: Gautam Dantas/University of Washington

Using sophisticated computer algorithms running on standard desktop computers, researchers have designed and constructed a novel functional protein that is not found in nature. The achievement should enable researchers to explore larger questions about how proteins evolved and why nature “chose” certain protein folds over others.

The ability to specify and design artificial proteins also opens the way for researchers to engineer artificial protein enzymes for use as medicines or industrial catalysts, said the study’s lead author, Howard Hughes Medical Institute investigator David Baker at the University of Washington.

Proteins are initially synthesized as long chains of amino acids and they cannot function properly until they fold into intricate globular structures. Understanding and predicting the rules that govern this complex folding process — involving the folding of the main backbone and the packing of the molecular side chains of the amino acids — is one of the central problems of biology.

According to Baker, the ability to specify a desired folded protein structure and then to create that protein offers powerful scientific and practical benefits. “First, specifying a protein fold and then designing that protein is a very stringent test of our current understanding of the forces and energetics of macromolecular systems,” he said. “Because designing something that’s completely new means you can’t copy any aspect from nature.

“Secondly, if one can design completely new structures, one can potentially design novel molecular machines — proteins for carrying out new functions as therapeutics, catalysts, etc. And finally, there’s the evolutionary question of whether the folds that are sampled in nature are the limit of what’s possible; or whether there are quite different folds that are also possible,” he said. “Basically, we want to understand whether nature only sampled a subset of what’s possible,” said Baker.

“At each position, you can have one of the twenty amino acids, and for each of those amino acids you can have on the order of ten different shapes,” he said. “So, you have two hundred different possible shapes for each piece. With those restrictions, it may be that there are some outlines to this jigsaw puzzle that you just cannot achieve. So you need to have a way of changing the boundary to find a protein that can actually be made, because the main constraint is that the side chains fit together perfectly in the interior of the protein.

In their design and construction effort, the scientists chose a version of a globular protein of a type called an alpha/beta conformation that was not found in nature. “We chose this conformation because there are many of this type that are currently found in nature, but there are glaring examples of possible folds that haven’t been seen yet,” he said. “We chose a fold that has not been observed in nature.”

Their computational design approach was iterative, in that they specified a starting backbone conformation and identified the lowest energy amino acid sequence for this conformation using the RosettaDesign program they had developed previously RosettaDesign is available free to academic groups at www.unc.edu/kuhlmanpg/rosettadesign.htm.

The result was a 93-amino acid protein structure they called Top7. “It’s called Top7, because there was a previous generation of proteins that seemed to fold right and were stable, but they didn’t appear to have the perfect packing seen in native proteins,” said Baker.

“One of the real surprises came when we actually solved the crystal structure and found it to be marvelously close to what we had been trying to make,” said Baker. “That gave us encouragement that we were on the right track.”

According to Baker, the achievement of designing a specified protein fold has important implications for the future of protein design. “Probably the most important lesson is that we can now design completely new proteins that are very stable and are very close in structure to what we were aiming for,” he said. “And secondly, this design shows that our understanding and description of the energetics of proteins and other macromolecules cannot be too far off; otherwise, we never would have been able to design a completely new molecule with this accuracy.”

The next big challenge, said Baker, is to design and build proteins with specified functions, an effort that is now underway in his laboratory.