Unique software speeds calculations on one of world&#146;s fastest supercomputers, other applications 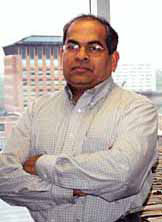 Ohio State University software is helping some of the world’s fastest supercomputers confront big scientific questions, from global climate change to the structure of intricate molecules.

While supercomputers were once built only as large-scale mainframe structures that were extremely expensive — some costing tens to hundreds of millions of dollars — a different kind of supercomputer based on clusters of many desktop-style computers has become more common in recent years, explained Dhabaleswar Panda, professor of computer and information science at Ohio State and leader of the MVAPICH research team.

Yet complicated scientific visualizations, such as the flow of gas molecules in Earth’s atmosphere — a critical resource for scientists studying climate change — pose a substantial problem for cluster computing. That’s because individual computers, called nodes, must compute in a parallel manner while sending much information back and forth to each other.

“At some point, adding nodes to a cluster doesn’t make the calculations go any faster, because it introduces communication and synchronization overheads, and researchers have to rely on software to manage communication between nodes effectively,” Panda said. “MVAPICH takes that software a step further by connecting it with the emerging InfiniBand network technology.”

Most notably, Ohio State’s MVAPICH supports Virginia Tech’s innovative Macintosh-based supercomputer, which is expected to rank third on the list of the world’s top 500 fastest supercomputers Sunday at the Supercomputing Conference 2003 in Phoenix.

Another collaboration with computer chip maker Intel and leading InfiniBand developer Mellanox Technologies, Inc, of Santa Clara, California, is opening the Ohio State software to further applications in research and business. These companies have used MVAPICH to enable calculations on an off-the-shelf supercomputer that is capable of performing teraflop-level computing, or trillions of calculations per second. Intel calls-the system TOTS, for “TeraFlop-Off-the-Shelf,” and it will debut in the exhibition hall of the supercomputing conference.

Panda believes that the development of TOTS is leading to a new era of commodity systems when research labs and commercial companies with smaller budgets can benefit from supercomputing technology. MVAPICH helps to make that happen, he said.

MVAPICH bridges the gap between the traditional message passing interface (MPI) — the software that manages communication between nodes on a supercomputer — and the InfiniBand technology.

InfiniBand, short for “infinite bandwidth,” is a new networking architecture standard that was developed by an industry consortium to support high performance computing systems, including supercomputers.

Until Panda and Pete Wyckoff, research scientist at the Ohio Supercomputer Center, developed MVAPICH in 2002, InfiniBand and MPI were hopelessly incompatible, Panda said.

The name MVAPICH is short for “MPI for InfiniBand on VAPI Layer.” VAPI refers to the VAPI software interface developed by Mellanox. MVAPICH is pronounced like “em-vah-peach.”

“These projects at national labs are important, because they show that our software can scale up from small applications to large,” Panda said. At Ohio State, Panda had previously tested the software on an 8-node and 16-node cluster.

Builders of supercomputers and modern clusters can visit Panda’s Web site to download the source code for MVAPICH and work with Ohio State to develop new applications (http://nowlab.cis.ohio-state.edu/projects/mpi-iba/).

This is not the first time work from Ohio State and the Ohio Supercomputer Center (OSC) garnered a ranking on the top 500 list. On the current top 500 list, OSC’s cluster ranks 180.

The primary funding for Ohio State to develop MVAPICH came from Sandia National Laboratory, the Department of Energy, and the National Science Foundation. Intel provided partial funding, and Mellanox donated InfiniBand network adapters and switches to the project.