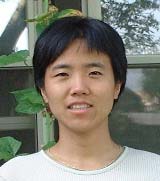 Scientists and computer gamers alike could benefit from a new method for creating soft, realistic shadows in computer-generated images.

Engineers at Ohio State University have created computer algorithms that model how light passes through translucent three-dimensional objects or fluids such as water, clouds, fire, and smoke. The result: shadows that begin to approach the realism of Hollywood animation, but don’t require as much computer memory to create.

Caixia Zhang, now a doctoral student at Ohio State, began this project for her master’s thesis. She and Roger Crawfis, professor of computer and information science, described the work in the current issue of the journal IEEE Transactions on Visualization and Computer Graphics.

The new software algorithms are unique because they generate soft shadows for 3D objects, and take into account factors such as how light fades as it passes through a translucent object, Zhang said.

The engineers tested the algorithms by creating shadows for objects of varying complexity, including a cloud, a group of robots, and a bonsai tree.

Crawfis characterized Zhang’s work as a bridge between low-level animation software and the high-end products used by Hollywood to create animated movies.

“The ultimate goal is super-accurate, super-fast, low-memory image rendering,” he said. “This work is a step in that direction.”

“Hollywood now spends an hour per frame, for animation that uses 30 frames a second,” he continued. But moviemakers could use the Ohio State algorithms to make more realistic mock-ups as they’re developing an animation.

“The challenge is to display the data in a way that someone can get the information they need,” Zhang said.

To make the new algorithms, she used a common volume-rendering method called splatting. Some methods trace a viewer’s assumed line of sight to an object to create an image. Splatting, on the other hand, assumes that the object will be projected against a two-dimensional surface such as a TV or movie screen, so the calculations can be done as if for a 2D object.

“The advantage of splatting is that you can keep track of relevant voxels, and it’s less expensive in terms of data storage,” she said.

With the current advancements being made in graphics cards and related computer hardware, Crawfis feels that consumers would soon be able to enjoy computer games that use the new algorithms on their home PC.

The University of Erlangen-Nuremberg supplied the data for the bonsai tree used in this study, and funding came from a National Science Foundation CAREER award.