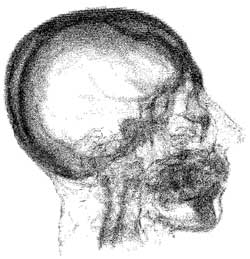 This image of a human cranium was created with a new kind of computer-imaging software that uses the ancient technique of stippling to convert complex medical data into 3-D images that can be quickly viewed by medical professionals. Data from CT scans were converted into dots to create the stippled image. Cave dwellers and artisans used stippling thousands of years ago to create figures by painting or carving a series of tiny dots. More recently, 19th century Parisian artist Georges Seurat used the method, also called pointillism, to draw colorful, intricately detailed works. Because dots are the most simple visual element in a picture, they also are ideal for computer visualizations. (Purdue University School of Electrical and Computer Engineering) <br>

Ancient artists used a technique called stippling – in which pictures are created by painting or carving a series of tiny dots – to produce drawings on cave walls and utensils thousands of years ago.

Now engineers at Purdue University have created a new kind of computer-imaging software that uses stippling to quickly produce complex pictures of internal organs and other renderings. The method is 10 times faster than some conventional methods and could provide a tool for medical professionals to quickly preview images in real time as a patient is being examined with imaging technologies such as CT scans and magnetic resonance imaging (MRI).

Because dots are the most simple visual element in a picture, they also are ideal for computer visualizations, said David S. Ebert, an associate professor in Purdue’s School of Electrical and Computer Engineering.

The researchers presented a paper about their new technique Nov. 1 during the Institute of Electrical and Electronics Engineers’ Visualization 2002 Conference in Boston. IEEE cited the work as the best paper presented during the conference. The paper was written by Ebert; Purdue graduate student Aidong Lu; Christopher J. Morris, a researcher at IBM’s Thomas J. Watson Research Center; Penny Rheingans, an assistant professor in the Computer Science and Electrical Engineering Department at the University of Maryland, Baltimore County; and Charles Hansen, an associate professor in the School of Computing at the University of Utah.

The software can use data from three-dimensional imaging techniques – such as CT scans and MRI – to quickly draw pictures of the body, converting those complex, raw medical data into images viewed in real time. The 3-D image can be rotated and manipulated to zoom in on specific portions. Then, a doctor who wanted to view the same regions in more detail could use a more time-consuming imaging method.

“You can apply this to data sets from scientific applications and medical applications to get a quick preview and understanding of the most important features of the data, which you can interact with in real time,” Ebert said. “Because points are very simple geometrically, it is a way to pull out the features of the data set or help you find problems more quickly.

“More conventional imaging methods of, say a CT scan of a person’s head, require slower processing techniques, which means either you have to do a lot of processing or it takes a while to generate an image. We can have a CT rendering of a person’s internal organs in real time, where the organs are represented as a series of small points.”

The method could be ready for commercialization soon.

“It is at the point where people can download it and use it, so it could be ready for commercial use within a year,” said Ebert, director of the Purdue Rendering and Perceptualization Lab.

Animations showing how the method works are available. The research has been funded by the National Science Foundation and the U.S. Department of Energy.