Programming light on a chip 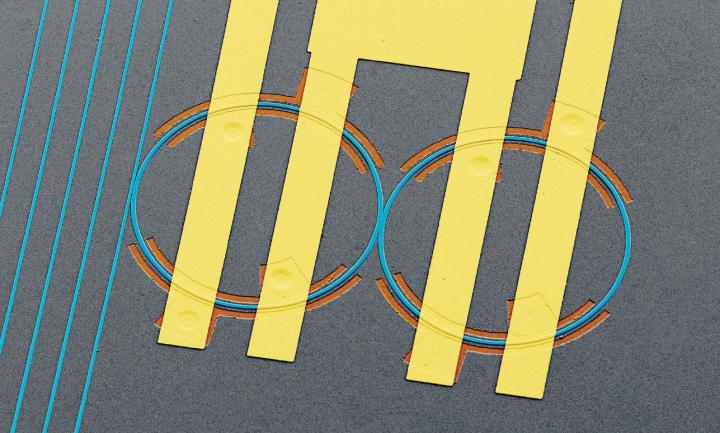 A new integrated photonics platform that can store light and electrically control its frequency (or color) in an integrated circuit. Credit: Loncar Lab/HarvardSEAS

Researchers from the Harvard John A. Paulson School of Engineering and Applied Sciences (SEAS) have developed a new integrated photonics platform that can store light and electrically control its frequency (or color) in an integrated circuit.

The platform draws inspiration from atomic systems and could have a wide range of applications including photonic quantum information processing, optical signal processing, and microwave photonics.

“This is the first time that microwaves have been used to shift the frequency of light in a programmable manner on a chip,” said Mian Zhang, a former postdoctoral fellow in Applied Physics at SEAS, now CEO of Harvard-spawned startup HyperLight Corporation and first author of the paper.

“Many quantum photonic and classical optics applications require shifting of optical frequencies, which has been difficult. We show that not only can we change the frequency in a controllable manner, but using this new ability we can also store and retrieve light on demand, which has not been possible before.”

The research was published in Nature Photonics.

Microwave signals are ubiquitous in wireless communications, but researchers thought they interact too weakly with photons. That was before SEAS researchers, led by Marko Loncar, the Tiantsai Lin Professor of Electrical Engineering, developed a technique to fabricate high-performance optical microstructures using lithium niobate, a material with powerful electro-optic properties.

Loncar and his team previously demonstrated that they can propagate light through lithium niobate nanowaveguides with very little loss and control light intensity with on-chip lithium niobate modulators. In the latest research, they combined and further developed these technologies to build a molecule-like system and used this new platform to precisely control the frequency and phase of light on a chip.

“The unique properties of lithium niobate, with its low optical loss and strong electro-optic nonlinearity, give us dynamic control of light in a programmable electro-optic system,” said Cheng Wang, co-first author of the paper and now Assistant Professor at City University of Hong Kong. “This could lead to the development of programmable filters for optical and microwave signal processing and will find applications in radio astronomy, radar technology, and more.”

Next, the researchers aim to develop even lower-loss optical waveguides and microwave circuits using the same architecture to enable even higher efficiencies and, ultimately, achieve a quantum link between microwave and optical photons.

“The energies of microwave and optical photons differ by five orders of magnitude, but our system could possibly bridge this gap with almost 100 percent efficiency, one photon at a time,” said Loncar, senior author of the paper. “This would enable the realization of a quantum cloud – a distributed network of quantum computers connected via secure optical communication channels.”

The research was also co-authored by Yaowen Hu, Amirhassan Shams-Ansari, Tianhao Ren from the Laboratory for Nanoscale Optics at Harvard; and Shanhui Fan, Professor of Electrical Engineering at Stanford University. It was supported in part by the National Science Foundation, the Office of Naval Research, the Army Research Laboratory Center for Distributed Quantum Information, and the Center for Integrated Quantum Materials (CIQM). Device fabrication was performed at the Center for Nanoscale Systems at Harvard University.