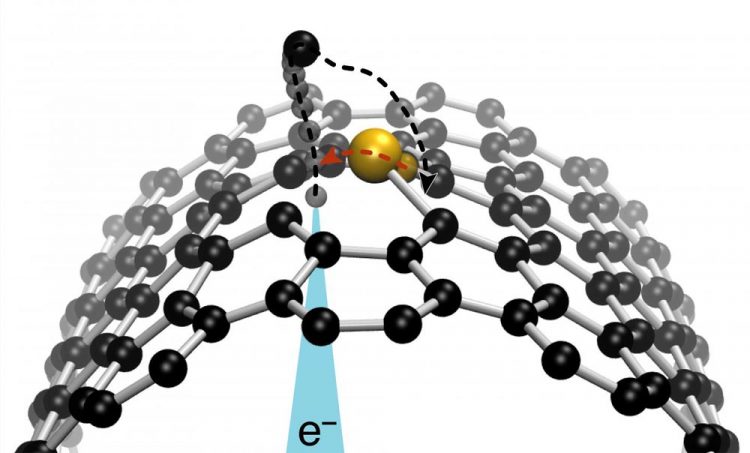 An electron beam focused on a carbon atom next to a silicon impurity atom within the curved wall of a single-walled carbon nanotube can controllably make it jump to where the beam was placed. Credit: © Toma Susi/University of Vienna

The team of Toma Susi at the University of Vienna uses a state-of-the-art electron microscope, the UltraSTEM, to manipulate strongly bound materials with atomic precision.

Since the instruments used are fully computerized, it is possible to show in a simulation how researchers actually use them. This allows for compelling and largely realistic presentations of the most recent research in materials science.

A simulation game on display at the Vienna Technical Museum in their special exhibition “Work & Production; thinking_forward_” is now also released online, together with the latest research advance of silicon impurity manipulation in single-walled carbon nanotubes.

The Nion UltraSTEM scanning transmission electron microscope of the University of Vienna allows a 50,000,000x magnification, and is fully computer-controlled.

Since image contrast depends on how much the electrons are scattered at each location – which in turn is determined by the charge of the nucleus, with silicon having more protons than carbon – we can directly see the where the impurities are located.

In addition to imaging, the focused electron beam of the microscope can be used to move the atoms. Each electron of this beam has a small chance of being scattered back by the nucleus of this targeted atom, giving the atom a small push in the opposite direction, as revealed by earlier research by the group.

The electron beam scans across a graphene sample line by line, revealing the locations of the carbon atoms that make up the lattice, as well as the brighter silicon impurities. In practice, the electron beam is directed by moving a mouse cursor on a computer screen, which controls the microscope electronics.

“So, in effect, we are playing a computer game in order to do our research”, Susi explains. He continues. “I used to play many games when I was younger, and I notice that I am faster than some of my younger colleagues who are more used to touch screens!”

The simulation game has been part of the special exhibition “Work & Production; thinking_forward_” at the Vienna Technical Museum that opened last November, and also features typical samples used for the research as well as information on the underlying physics.

Now, to reach an even larger audience, the team is launching a website with the same content, including a browser-based version of the simulation game called “Atom Tractor Beam”. The name is inspired by the science fiction concept of an attractive beam of energy popularized by Star Trek.

“The name is appropriate since the silicon impurities move to the location where the cursor is pointed, as if attracted by the electron beam”, Susi concludes.

Concurrently with the launch of the website, the team has reported their latest research advance in atom manipulation in an article published by Advanced Functional Materials. In this work, the team demonstrates that silicon impurities, which have thus far been studied in graphene, can also be controllably manipulated in a new material, namely single-walled carbon nanotubes. Since these are confined one-dimensional structures, this advance may enable new kinds of tunable electronic devices.

The science communication project was supported by the Vienna Business Agency. Main funding for the research came from the European Research Council (ERC) and the Austrian Science Fund (FWF).