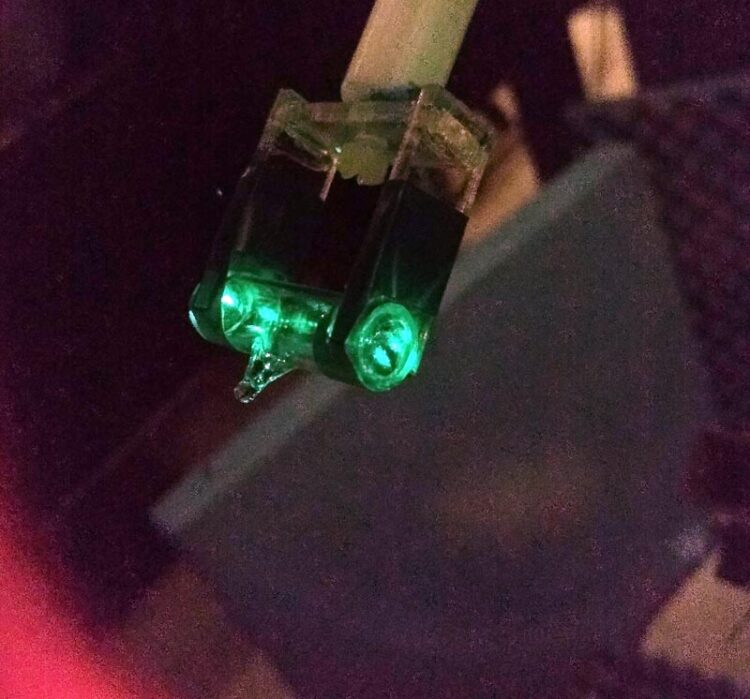 NIST researchers and collaborators determined the direction of an incoming radio signal based on laser measurements at two locations in this sensor filled with a gas of cesium atoms.
Credit: NIST

Researchers at the National Institute of Standards and Technology (NIST) and collaborators have demonstrated an atom-based sensor that can determine the direction of an incoming radio signal, another key part for a potential atomic communications system that could be smaller and work better in noisy environments than conventional technology.

NIST researchers previously demonstrated that the same atom-based sensors can receive commonly used communications signals. The capability to measure a signal’s “angle of arrival” helps ensure the accuracy of radar and wireless communications, which need to sort out real messages and images from random or deliberate interference.

“This new work, in conjunction with our previous work on atom-based sensors and receivers, gets us one step closer to a true atom-based communication system to benefit 5G and beyond,” project leader Chris Holloway said.

In NIST’s experimental setup, two different-colored lasers prepare gaseous cesium atoms in a tiny glass flask, or cell, in high-energy (“Rydberg”) states, which have novel properties such as extreme sensitivity to electromagnetic fields. The frequency of an electric field signal affects the colors of light absorbed by the atoms.

An atom-based “mixer” takes input signals and converts them into different frequencies. One signal acts as a reference while a second signal is converted or “detuned” to a lower frequency. Lasers probe the atoms to detect and measure differences in frequency and phase between the two signals. Phase refers to the position of electromagnetic waves relative to one another in time.

The mixer measures the phase of the detuned signal at two different locations inside the atomic vapor cell. Based on the phase differences at these two locations, researchers can calculate the signal’s direction of arrival.

To demonstrate this approach, NIST measured phase differences of a 19.18 gigahertz experimental signal at two locations inside the vapor cell for various angles of arrival. Researchers compared these measurements to both a simulation and a theoretical model to validate the new method. The selected transmission frequency could be used in future wireless communications systems, Holloway said.

The work is part of NIST’s research on advanced communications, including 5G, the fifth-generation standard for broadband cellular networks, many of which will be much faster and carry far more data than today’s technologies. The sensor research is also part of the NIST on a Chip program, which aims to bring world-class measurement-science technology from the lab to users anywhere and anytime. Co-authors are from the University of Colorado Boulder and ANSYS Inc. in Boulder.

Atom-based sensors in general have many possible advantages, notably measurements that are both highly accurate and universal, that is, the same everywhere because the atoms are identical. Measurement standards based on atoms include those for length and time.

With further development, atom-based radio receivers may offer many benefits over conventional technologies. For example, there is no need for traditional electronics that convert signals to different frequencies for delivery because the atoms do the job automatically. The antennas and receivers can be physically smaller, with micrometer-scale dimensions. In addition, atom-based systems may be less susceptible to some types of interference and noise.