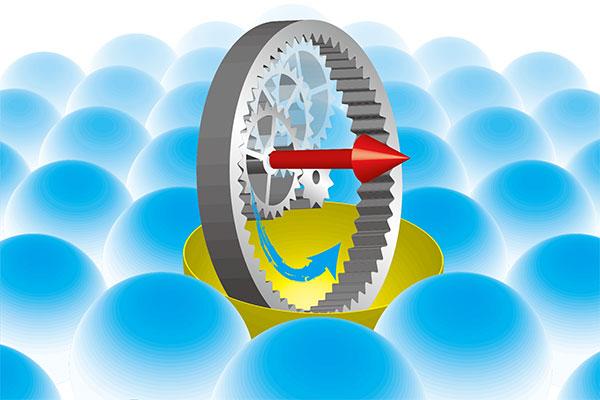 Conceptual art of the acceptor-based spin-orbit qubit. A boron atom (yellow) implanted in silicon crystal (blue) bounds a hole. Orbital motion of a hole in silicon is coupled to its spin degree of freedom. This cou-pling is reminiscent of gears where circular motion (blue arrow) and spinning (red arrow) are locked to-gether. Quantum information is encoded to the combined motion and spin of a hole in the spin-orbit qubit.

Credit: Takashi Kobayashi, Tohoku University
Usage Restrictions: News organizations may use or redistribute this image, with proper attribution, as part of news coverage of this paper only.

Quantum bits, or qubits, can hold quantum information much longer now thanks to efforts by an international research team. The researchers have increased the retention time, or coherence time, to 10 milliseconds – 10,000 times longer than the previous record – by combining the orbital motion and spinning inside an atom. Such a boost in information retention has major implications for information technology developments since the longer coherence time makes spin-orbit qubits the ideal candidate for building large quantum computers.

They published their results on July 20 in Nature Materials.

“We defined a spin-orbit qubit using a charged particle, which appears as a hole, trapped by an impurity atom in silicon crystal,” said lead author Dr. Takashi Kobayashi, research scientist at the University of New South Wales Sydney and assistant professor at Tohoku University. “Orbital motion and spinning of the hole are strongly coupled and locked together. This is reminiscent of a pair of meshing gears where circular motion and spinning are locked together.”

Qubits have been encoded with spin or orbital motion of a charged particle, producing different advantages that are highly demanded for building quantum computers. To utilize the advantages of qubits, Kobayashi and the team specifically used an exotic charged particle “hole” in silicon to define a qubit, since orbital motion and spin of holes in silicon are coupled together.

Spin-orbit qubits encoded by holes are particularly sensitive to electric fields, according to Kobayashi, which allows for more rapid control and benefits scaling up quantum computers. However, the qubits are affected by electrical noise, limiting their coherence time.

Think of gears in a watch. Their individual spinning propels the entire mechanism to keep time. It is neither the spin nor orbital motion, but a combination of them that takes the information forward.

“These results open a pathway to develop new artificial quantum systems and to improve the functionality and scalability of spin-based quantum technologies,” Kobayashi said.

This work was supported in part by the ARC Centre of Excellence for Quantum Computation and Communication Technology, the U.S. Army Research Office and the Tohoku University Graduate Program in Spintronics.