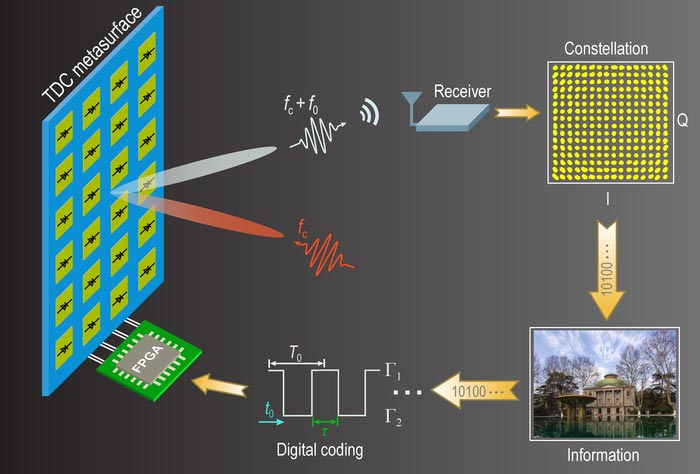 By applying control-voltage sequences with different duty ratios and time delays from the FPGA module to the PIN diodes, the incident monochromatic wave is converted to multiple harmonics, whose amplitudes and phases can be very accurately manipulated. The +1st-order harmonic is selected to realize the 256 QAM mmWave wireless communication system.
Credit: ©Science China Press

Metamaterials and metasurfaces have attracted great interests in recent years for their versatile possibilities in manipulating electromagnetic (EM) waves. Embedded tunable devices such as positive-intrinsic-negative (PIN) diodes and varactors enable digital representations of metasurfaces and programmability of functions in real time, and hence provide new avenues to tailor the EM waves and digital information dynamically.

Based on the programmable metasurface, the concept of time-domain digital coding metasurface (TDCM) was proposed to manipulate the frequency harmonics by changing the external biasing voltage with time (National Science Review, 6, 231-238, 2019). Plenty of intriguing TDCM-based phenomena have been reported, such as the harmonic beam steering, nonlinear polarization syntheses, programmable nonreciprocal effects, Doppler cloaking, and broadband spectral camouflage.

Particularly in wireless communications, TDCMs have found fascinating applications by combining the Shannon entropy and signal-processing algorithms in the information science with the real-time programmable meta-elements. On one hand, TDCMs have been exploited to smartly reconfigure the wireless propagation environments, thereby improving the network coverages; on the other hand, the ability of real-time manipulating the EM responses (e.g. phase, amplitude, and spectrum) and digital information has empowered TDCMs to act as new wireless transmitters without using the conventional radio frequency (RF) chains.

In this work, the researchers propose a new coding strategy to achieve accurate and ultra-broadband controls of harmonic waves based on TDCM in the millimeter-wave (mmWave) frequency. The reflection coefficient of TDCM is periodically switched in time between two states, thus generating a series of harmonics regularly spread around the carrier frequency.

More importantly, the harmonic intensities and phases are precisely and independently determined by the duty ratios and time delays of the devised digital coding sequences. Therefore, the required harmonic distributions can be generated at will. Besides, this harmonic-control method can work even when the coding states of TDCM are imperfect. Based on the accurate and extra-broadband harmonic-control paradigm, the researchers explore to establish a 256QAM mmWave wireless communication system.

At the incidence of a monochromatic wave, the carrier wave is shifted to several harmonic waves under the control of digital coding sequences. Thus, the researchers can directly synthesize the standardized constellations and transmit the information at the +1st-order harmonic via loading different coding sequences to TDCM without using the complicated RF chain, exhibiting the relevant advantages of system simplicity, cost reduction and energy efficiency.

As the experimental verification, the researchers realized a TDCM-boosted wireless communication system operating in the mmWave region from 27GHz to 31.15GHz, in which 256 QAM and other modulation schemes have been successfully accomplished. During the experiment, the transmitted bit-streams are recovered and the transmitted information (two pictures of the auditorium and library of Southeast University) is received with good performance of the measured real-time constellation diagrams. The experimental results illustrate the validity of the proposed harmonic-control theory and the possibility to establish TDCM-based high-order mmWave wireless communication systems.

In conclusion, the researchers proposed an ingenious digital coding strategy to control the harmonic amplitudes and phases simultaneously with very high accuracy. Based on the precise manipulations of harmonics and broadband features, the researchers set up a novel 256QAM mmWave wireless communication system. Compared with the conventional architectures in the mmWave band that require complicated baseband operations and expensive RF hardware, the simplified system circumvented many difficulties and reached a very high leave of performance at low cost. The researchers believe that the proposed coding strategy, wave manipulation mechanism, and simplified system architecture can be applied in many future 6G communications and new radar systems.