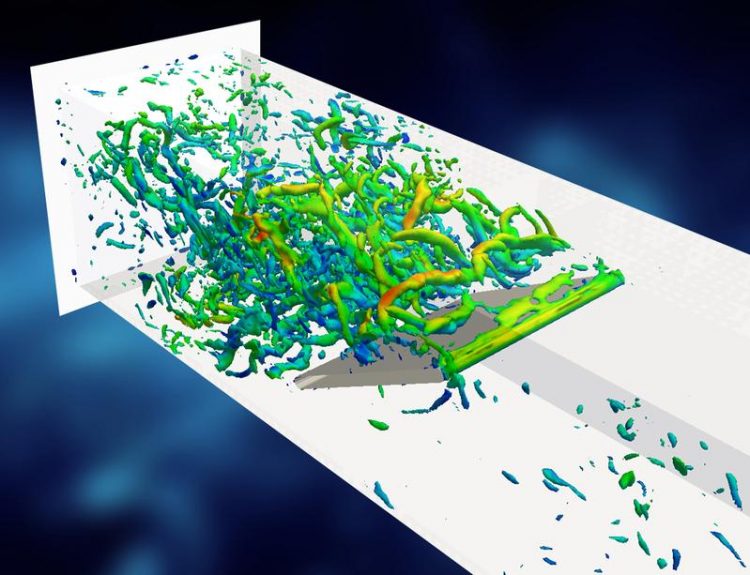 Simulations on supercomputers answer important industrial questions, such as how air flows behave in air conditioning systems, on rotor blades or for entire airplanes.

In the coming years, new approaches to hardware design will make computers available which have a capacity of one trillion computing operations per second. So-called exascale computers have a computing speed a thousand times higher than previous supercomputers. This enables them to overcome complex problems that are not yet solvable.

Scientists at the Fraunhofer Institute for Algorithms and Scientific Computing SCAI have addressed this problem. They develop methods which perform data analysis during simulation. This approach minimizes memory requirements and computing time. In this way, even huge amounts of data can be analyzed efficiently.

The SCAI scientists concentrate on methods for the comparative analysis of simulation data. For example, the comparison of the data enables engineers to see at a glance how a modified component shape affects the flow behaviour inside an air conditioning system and thus the aerodynamic noise generation level. Eventually, that will help to design better products.

As a member of the newly founded “Competence Center of the European Union for Engineering Applications” EXCELLERAT, Fraunhofer SCAI works together with 13 partners from 7 European countries.

The aim is to make the best possible use of the new potentials of supercomputing and thus strengthen Europe's competitiveness in this field. Over the next three years, the participants will deal with six selected program codes and associated workflows, such as data analysis, management and visualization.

In addition to the efficient handling of large amounts of data, the project focuses on the scalability of the codes. In this context, scalability means that programs work efficiently on both laptops and exascale computers.

Since EXCELLERAT should also help to expand the use of supercomputing in industrial contexts, the project team will optimize the codes using twelve application examples from industry. Among others, these include the simulation of flows in car air conditioning systems as well as the calculation of combustion chamber emissions. Moreover, a common knowledge platform is to be developed.