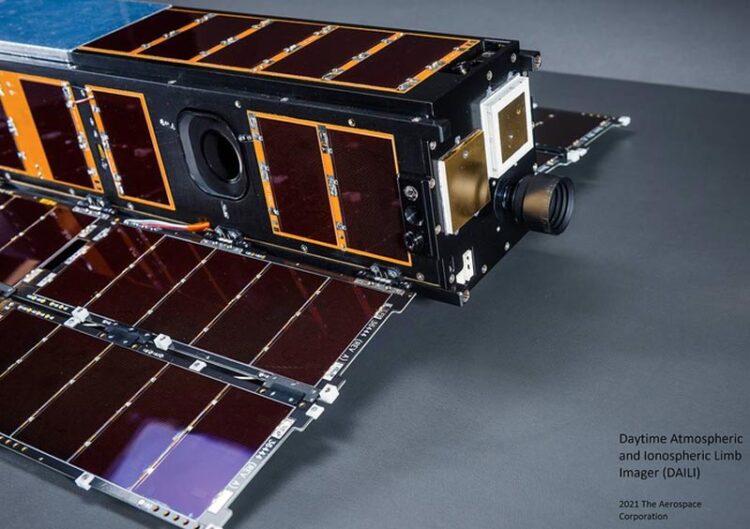 DAILI successfully launched aboard the SpaceX Falcon 9 rocket at 5:07 a.m. EST on Dec. 21, 2021 from Launch Complex 39A at NASA’s Kennedy Space Center in Florida.
Credit: NASA/ The Aerospace Corporation

DAILI successfully launched aboard the SpaceX Falcon 9 rocket at 5:07 a.m. EST on Dec. 21, 2021 from Launch Complex 39A at NASA’s Kennedy Space Center in Florida.

Launching no earlier than Dec. 21 at 5:06 a.m. EST on a Falcon 9 rocket from NASA’s Kennedy Space Center in Florida, DAILI, a 6U CubeSat (10x10x60cm), seeks to understand the composition of the chunk of Earth’s atmosphere approximately 80 to 217 miles (130 to 350 kilometers) above the surface. In early January, the CubeSat will be deployed to orbit from the ISS.

DAILI’s data will inform models of the atmosphere used to calculate how a satellite’s orbit is affected by changing conditions in space, such as orbital drag. The data from this CubeSat can also be used to support NASA’s ICON and GOLD missions.

CubeSats are miniaturized satellites used to develop space research and instrumentation. DAILI was selected through the Heliophysics Technology and Instrument Development for Science (HTIDS) Low Cost Access to Space (LCAS) program. The Aerospace Corporation designed, built, and will manage operations for DAILI.