Nanoelectronics learn the same way as the human brain 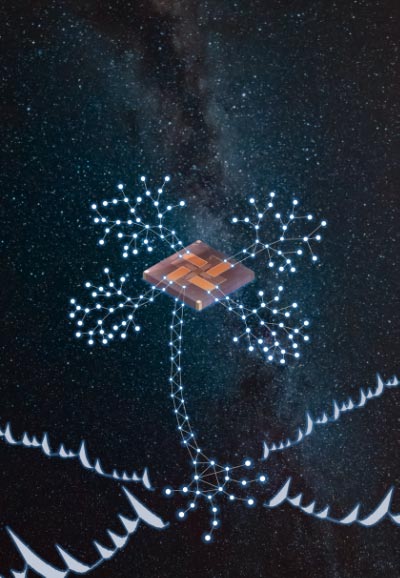 Especially activities in the field of artificial intelligence, like teaching robots to walk or precise automatic image recognition, demand ever more powerful, yet at the same time more economical computer chips.

While the optimization of conventional microelectronics is slowly reaching its physical limits, nature offers us a blueprint how information can be processed and stored quickly and efficiently: our own brain.

For the very first time, scientists at TU Dresden and the Helmholtz-Zentrum Dresden-Rossendorf (HZDR) have now successfully imitated the functioning of brain neurons using semiconductor materials. They have published their research results in the journal Nature Electronics (DOI: 10.1038/s41928-020-0412-1).

Today, enhancing the performance of microelectronics is usually achieved by reducing component size, especially of the individual transistors on the silicon computer chips. “But that can't go on indefinitely – we need new approaches”, Larysa Baraban asserts.

The physicist, who has been working at HZDR since the beginning of the year, is one of the three primary authors of the international study, which involved a total of six institutes. One approach is based on the brain, combining data processing with data storage in an artificial neuron.

“Our group has extensive experience with biological and chemical electronic sensors,” Baraban continues. “So, we simulated the properties of neurons using the principles of biosensors and modified a classical field-effect transistor to create an artificial neurotransistor.”

The advantage of such an architecture lies in the simultaneous storage and processing of information in a single component. In conventional transistor technology, they are separated, which slows processing time and hence ultimately also limits performance.

Modeling computers on the human brain is no new idea. Scientists made attempts to hook up nerve cells to electronics in Petri dishes decades ago. “But a wet computer chip that has to be fed all the time is of no use to anybody,” says Gianaurelio Cuniberti from TU Dresden.

The Professor for Materials Science and Nanotechnology is one of the three brains behind the neurotransistor alongside Ronald Tetzlaff, Professor of Fundamentals of Electrical Engineering in Dresden, and Leon Chua from the University of California at Berkeley, who had already postulated similar components in the early 1970s.

Now, Cuniberti, Baraban and their team have been able to implement it: “We apply a viscous substance – called solgel – to a conventional silicon wafer with circuits. This polymer hardens and becomes a porous ceramic,” the materials science professor explains.

“Ions move between the holes. They are heavier than electrons and slower to return to their position after excitation. This delay, called hysteresis, is what causes the storage effect.” As Cuniberti explains, this is a decisive factor in the functioning of the transistor. “The more an individual transistor is excited, the sooner it will open and let the current flow. This strengthens the connection. The system is learning.”

Cuniberti and his team are not focused on conventional issues, though. “Computers based on our chip would be less precise and tend to estimate mathematical computations rather than calculating them down to the last decimal,” the scientist explains. “But they would be more intelligent.

For example, a robot with such processors would learn to walk or grasp; it would possess an optical system and learn to recognize connections. And all this without having to develop any software.” But these are not the only advantages of neuromorphic computers. Thanks to their plasticity, which is similar to that of the human brain, they can adapt to changing tasks during operation and, thus, solve problems for which they were not originally programmed.

HZDR is a member of the Helmholtz Association and has six sites (Dresden, Freiberg, Görlitz, Grenoble, Leipzig, Schenefeld near Hamburg) with almost 1,200 members of staff, of whom about 500 are scientists, including 170 Ph.D. candidates.