Home / Information Technology / Electric current is manipulated by light in an organic superconductor
07.09.2020 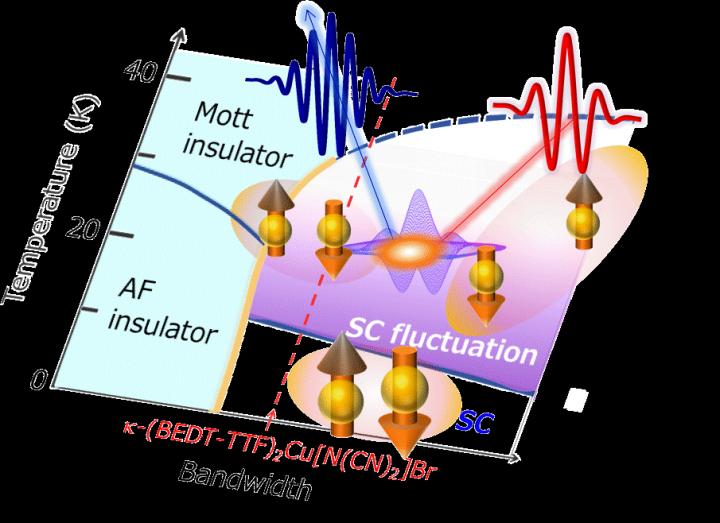 In modern information technology (IT), data are processed and carried by motion of electrons in a CPU. In the electric circuits, the electrons move in a desired direction by an applied electric field. A frequency of the on-off switching of the electron motion, which is referred to as a “CPU clock” for example, is an order of gigahertz (109 Hz).

On the other hand, an oscillating field of light with a frequency of petahertz (1015 Hz) has a potential for realizing petahertz operation of the on-off switching. If one can move electrons with the light frequency, the speed of data processing could be one million times faster than those in conventional computers. An electromagnetic oscillation of light has, however, never driven polarized current (i.e., the time average of the current during the light pulse is zero), because the oscillating light field is temporally/spatially symmetric. Researchers at Tohoku University, Nagoya University, Institute for Molecular Science, Okayama Science University and Chuo University have succeeded in moving electrons in an organic superconductor in a specific direction by irradiation of ultrashort laser pulses.

According to Ohm’s law, an induced current (and velocity of electrons) is proportional to the applied electric field. Note that Ohm’s law holds, if the electrons are scattered many times in solids. In fact, the resistivity of the materials is determined by the electron-electron and/or electron-phonon scattering processes. If the electric field can be applied on the time scale shorter than the scattering time, however, the electrons in solids do not have enough time to be averaged. Instead, the electrons should be accelerated and generate a polarized net current. Therefore, the researchers have attempted to realize such “scattering-free current” using ultrashort laser pulses which are sufficiently shorter than the electron scattering time (= about 40 femtoseconds in organic superconductors).

One obstacle to realize such an experiment is that electric detection of such a short-time current is impossible. Therefore, the researchers employ the optical detection. Second harmonic generation (SHG) has been well known as the method for detecting electronic symmetry breaking such as a macroscopic dipole moment in ferroelectrics. The SHG can be also induced by the polarized current which is another type of the electronic symmetry breaking.

The researchers shine their ultrashort laser with a pulse width of about 6 fs (6 × 10-15 s) on an organic centrosymmetric superconductor, κ-(BEDT-TTF)2Cu[N(CN)2]Br, and detect a second harmonic generation (SHG) (Fig. 1). This is in contrast to the common sense because the SHG is generated only in the materials in which spatial symmetry is broken. Their detection of the SHG in the centrosymmetric material indicates that a polarized net current is generated during the light irradiation.

To confirm such a non-linear polarized current, the researchers investigate carrier-envelope phase (CEP; relative phase between the oscillation of light and its envelope) dependence of the SHG, because CEP sensitive nature is a characteristic behavior of the current induced SHG. A periodic change of the SHG intensity as a function of the CEP (Fig. 2(a)) is an evidence that the observed SHG is actually attributable to the scattering-free current.

The researchers say, “With further understanding of the scattering-free non-linear petahertz current, we may be able to make computers with an operation speed of petahertz which is million times faster than the present ones of gigahertz. This phenomenon can be used also as a tool to elucidate the microscopic mechanism of superconducting states, because it is sensitive to the superconducting fluctuation.”