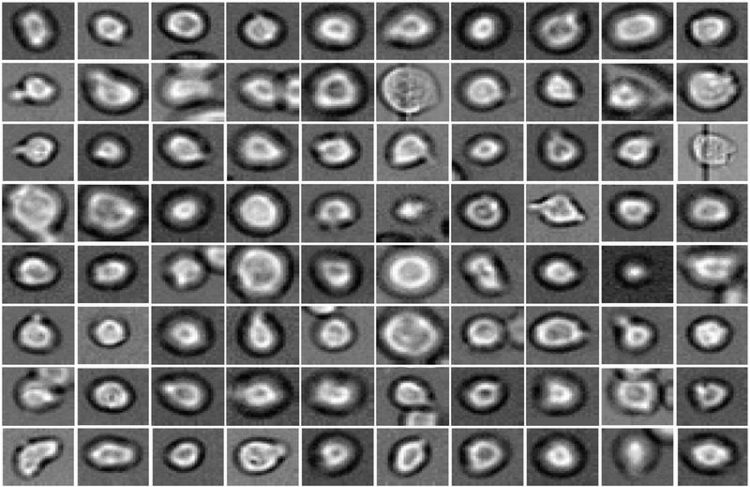 What are they going to be? Hematopoietic stem cells under the microscope: New methods are helping the Helmholtz scientists to predict how they will develop. Source: Helmholtz Zentrum München

Today, cell biology is no longer limited to static states but also attempts to understand the dynamic development of cell populations. One example is the generation of different types of blood cells from their precursors, the hematopoietic stem cells.

“A hematopoietic stem cell's decision to become a certain cell type cannot be observed. At this time, it is only possible to verify the decision retrospectively with cell surface markers,” explains Dr. Carsten Marr, head of the Quantitative Single Cell Dynamics Research Group at the Helmholtz Zentrum München's Institute of Computational Biology (ICB).

He and his team have now developed an algorithm that can predict the decision in advance. So-called Deep Learning is the key. “Deep Neural Networks play a major role in our method,” says Marr. “Our algorithm classifies light microscopic images and videos of individual cells by comparing these data with past experience from the development of such cells. In this way, the algorithm ‘learns’ how certain cells behave.”

Specifically, the researchers examined hematopoietic stem cells that were filmed under the microscope in the lab of Timm Schroeder at ETH Zurich.* Using the information on appearance and speed, the software was able to ‘memorize’ the corresponding behaviour patterns and then make its prediction. “Compared to conventional methods, such as fluorescent antibodies against certain surface proteins, we know how the cells will decide three cell generations earlier,” reports ICB scientist Dr. Felix Buggenthin, joint first author of the study together with Dr. Florian Büttner.

But what is the benefit of this look into the future? As study leader Marr explains, “Since we now know which cells will develop in which way, we can isolate them earlier than before and examine how they differ at a molecular level. We want to use this information to understand how the choices are made for particular developmental traits.”

In the future, the focus will expand beyond hematopoietic stem cells. “We are using Deep Learning for very different problems with sufficiently large data records,” explains Prof. Dr. Dr. Fabian Theis, ICB director and holder of the Mathematical Modelling of Biological Systems Chair at the TUM, who led the study together with Carsten Marr. “For example, we use very similar algorithms to analyse disease-associated patterns in the genome and identify biomarkers in clinical cell screens.”

* The study described here is the latest result of a close cooperation between the ICB scientists and Prof. Dr. Timm Schroeder from the Department of Biosystems Science and Engineering at ETH Zurich in Basel, who previously worked at the Helmholtz Zentrum in Munich. In July 2016, the scientists jointly introduced a software in ‘Nature Biotechnolgy’ that allows to observe individual cells over many days and simultaneously measure their molecular properties. https://www.helmholtz-muenchen.de/en/press-media/press-releases/2016/press-relea… They also published a study in ‘Nature’ that already dealt with the development of hematopoietic stem cells. Using time-lapse microscopy, the researchers were able to observe the maturation of living hematopoietic stem cells with high precision while also quantifying certain proteins. https://www.helmholtz-muenchen.de/en/press-media/press-releases/2016/press-relea…

Background:
Deep Learning algorithms simulate the learning processes in people using artificial neural networks. The principle functions particularly well when large quantities of data (Big Data) are available for training. Image recognition is one of Deep Learning's strengths. More decision layers are placed between the input (here, the cell image data) and the output (here, the prediction of the cell development) than usually found in neuronal networks, which is why the term “deep” is used.

The Institute of Computational Biology (ICB) develops and applies methods for the model-based description of biological systems, using a data-driven approach by integrating information on multiple scales ranging from single-cell time series to large-scale omics. Given the fast technological advances in molecular biology, the aim is to provide and collaboratively apply innovative tools with experimental groups in order to jointly advance the understanding and treatment of common human diseases. http://www.helmholtz-muenchen.de/icb

Technical University of Munich (TUM) is one of Europe’s leading research universities, with more than 500 professors, around 10,000 academic and non-academic staff, and 40,000 students. Its focus areas are the engineering sciences, natural sciences, life sciences and medicine, com-bined with economic and social sciences. TUM acts as an entrepreneurial university that promotes talents and creates value for society. In that it profits from having strong partners in science and industry. It is represented worldwide with a campus in Singapore as well as offices in Beijing, Brussels, Cairo, Mumbai, San Francisco, and São Paulo. Nobel Prize winners and inventors such as Rudolf Diesel, Carl von Linde, and Rudolf Mößbauer have done research at TUM. In 2006 and 2012 it won recognition as a German “Excellence University.” In international rankings, TUM regularly places among the best universities in Germany. http://www.tum.de/en/homepage

Freedom and individual responsibility, entrepreneurial spirit and open-mindedness: ETH Zurich stands on a bedrock of true Swiss values. Our university for science and technology dates back to the year 1855, when the founders of modern-day Switzerland created it as a centre of innovation and knowledge. At ETH Zurich, students discover an ideal environment for independent thinking, researchers a climate which inspires top performance. Situated in the heart of Europe, yet forging connections all over the world, ETH Zurich is pioneering effective solutions to the global challenges of today and tomorrow. Some 500 professors teach around 20,000 students – including 4,000 doctoral students – from over 120 countries. Their collective research embraces many disciplines: natural sciences and engineering sciences, architecture, mathematics, system-oriented natural sciences, as well as management and social sciences. The results and innovations produced by ETH researchers are channelled into some of Switzerland’s most high-tech sectors: from computer science through to micro- and nanotechnology and cutting-edge medicine. Every year ETH registers around 90 patents and 200 inventions on average. Since 1996, the university has produced a total of 330 commercial spin-offs. ETH also has an excellent reputation in scientific circles: 21 Nobel laureates have studied, taught or researched here, and in international league tables ETH Zurich regularly ranks as one of the world’s top universities. http://www.ethz.ch/en.html