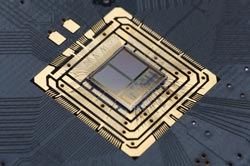 The neuromorphic chip containing silicon neurons which the researchers used for their data-classifying network.<br><br>Kirchhoff Institute for Physics, Heidelberg University<br>

A bakery assistant who takes the bread from the shelf just to give it to his boss who then hands it over to the customer? Rather unlikely. Instead, both work at the same time to sell the baked goods. Similarly, computer programs are more efficient if they process data in parallel rather than to calculate them one after the other. However, most programs that are applied still work in a serial manner.

Scientists from the Freie Universität Berlin, the Bernstein Center Berlin and Heidelberg University have now refined a new technology that is based on parallel data processing. In the so-called neuromophic computing, neurons made of silicon take over the computational work on special computer chips. The neurons are linked together in a similar fashion to the nerve cells in our brain. If the assembly is fed with data, all silicon neurons work in parallel to solve the problem. The precise nature of their connections determines how the network processes the data. Once properly linked, the neuromorphic network operates almost by itself. The researchers have now designed a network–a neuromorphic “program”–for this chip that solves a fundamental computing problem: It can classify data with different features. It is able to recognize handwritten numbers, or may distinguish certain plant species based on flowering characteristics.

“The design of the network architecture has been inspired by the odor-processing nervous system of insects,” explains Michael Schmuker, lead author of the study. “This system is optimized by nature for a highly parallel processing of the complex chemical world.” Together with work group leader Martin Nawrot and Thomas Pfeil, Schmuker provided the proof of principle that a neuromorphic chip can solve such a complex task. For their study, the researchers used a chip with silicon neurons, which was developed at the Kirchhoff Institute for Physics of Heidelberg University.

Computer programs that can classify data are employed in various technical devices, such as smart phones. The neuromorphic network chip could also be applied in super-computers that are built on the model of the human brain to solve very complex tasks. Using their prototype, the Berlin scientists are now able to explore how networks must be designed to meet the specific requirements of these brain-like computer. A major challenge will be that not even two neurons are identical – neither in silicon nor in the brain.