City of Hildesheim: Installation of StreetPong prototype a resounding success 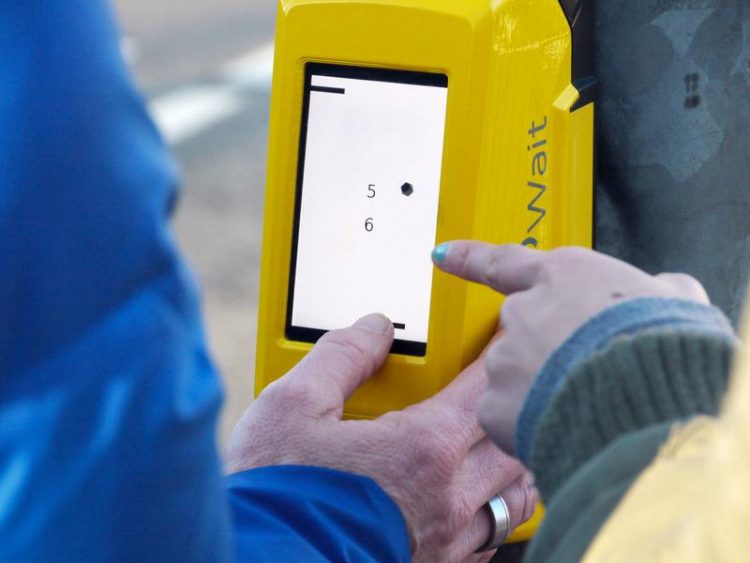 City of Hildesheim: Installation of StreetPong prototype a resounding success

The test results are in. All in all, they are positive, along with a couple of suggestions for improvement: StreetPong, the world’s first traffic-light game, is best suited in constant operation to traffic lights with an approximately equal number of pedestrians crossing the street in both directions and the game should end a couple of seconds earlier – before the green phase begins.

These are two examples of the suggestions that traffic planner Dr. Daniel Seebo from nationally renowned SHP Ingenieure engineering office in Hannover had, based on the StreetPong test phase at the end of 2014.

Under the direction of Dipl.-Ing. Anja Markwart, HAWK students in Traffic Engineering in the Faculty of Architecture, Engineering and Conservation Design monitored the traffic situation closely, including video recordings.

The goal was to evaluate the effect of the game on traffic and traffic flow for all types of traffic. After all, there were not any empirical values yet available for the world’s first traffic-light game with respect to safety. As commissioned by the HAWK, SHP Ingenieure has now evaluated the results and submitted a safety assessment.

As far as 84 percent of the StreetPong players questioned are concerned, there should be more traffic-light crossings equipped with the so-called ActiWait, whereby two players play the classic game of “Pong” with their finger on the display of the corresponding traffic-light button for as long as the pedestrians’ light is red.

20 percent of the persons asked said they could better imagine playing the game at larger, main intersections. After all, observations showed that sometimes there was no opponent on the other side of the street, which means that it is not possible to play the game. Then, if there are several pedestrians standing on one side of the street, it’s very tempting for one of them to cross against the lights just to be able to play.

For four weeks and long afterwards, the world premiere of the StreetPong traffic-light game caused quite a stir internationally and had Hildesheim holding its breath. With the support of the HAWK and the city of Hildesheim, the prototype of the game invented by two HAWK students, Amelie Künzler and Sandro Engel, was tested at a traffic light at the “Goschentor” intersection, close to the main HAWK buildings. Interested people from all over the world got in touch with the young entrepreneurs from Urban Invention.

During this time, the first miniseries of the invention was produced – and sold. “We were overwhelmed by the feedback we got and the interest that the media displayed. Now we want to get other cities excited about ActiWait.” The next city is already ready to go: the city of Oberhausen is expecting to install StreetPong at a large intersection still in May of this year.

All in all, traffic expert Seebo confirms: “Observations reveal that, for the most part, there were no problematic situations that developed while StreetPong was being played. Even younger schoolchildren were not observed fighting over who was to play the game.

In only one case was “bicycle traffic somewhat hindered due to a large number of people watching the game”, which possibly had to do with the media interest in the project. In another case, an ambulance pulled over to the edge of the street with its four-way flashers on and the “passengers got out to play the game”.

Seebo also mentioned two other aspects: “The game should not be installed close to bus stops. “If the player on the opposite side of the street wants to catch the bus, he or she might spontaneously run across the street against the lights. In addition: there should be a few seconds between the end of the game and the green light so that the player has a moment or two “to come back into the real world and pay proper attention to the traffic”.

Amelie Künzler and Sandro Engel are “absolutely delighted that the StreetPong test phase was so successful. We were able to put a smile on people’s faces where they might have least unexpected it and provided them with an opportunity to meet in a public place.

At the same time, we were able to show that ActiWait can make a positive contribution to traffic safety because, due to this pleasant pastime, significantly more pedestrians stopped and waited at the red light rather than trying to cross against the lights, thus not exposing themselves to danger.

We are grateful to have been given the opportunity to test this innovation here. Thanks to the observations and the feedback, we have already been able to make a number of improvements. For example: it will also be possible to use future apps on ActiWait if there are people waiting on only one side of the street.”

HAWK President Prof. Dr. Christiane Dienel comments from the point of view of the university: “With StreetPong, we show what a really practically oriented university is: students have a surprising idea during a course. To enable them to kick it off, experts from different disciplines pull together with them. In this case, the disciplines were Digital Media, Business Start-Ups, Traffic Engineering, the press office, and last but not least, the university administration itself – in cooperation with the city. And the results prove that we were right.”

That’s also what Hildesheim’s lord mayor, Dr. Ingo Meyer, thinks: “Thanks to StreetPong, our city experienced a positive echo in the media on an international scale. Because we had no previous experience with respect to traffic safety, this project proved to be a real challenge for us, a challenge that we were able to meet with the help of various accompanying and preventative measures. And we are all the happier that the installation of the world’s first prototype in Hildesheim was such a resounding success. We hope for the students that many other cities will follow our example and that StreetPong will also be a business success!”