Bringing Technology to People: Qualification at the Workplace 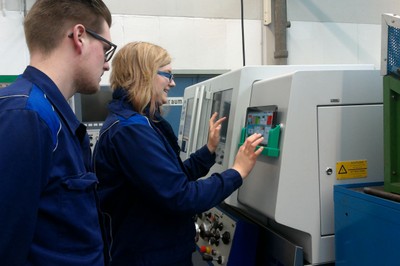 Trainees during the use of AmbiWise at a workstation. Daimler AG

As product diversity increases, the complexity of production processes is also rising. The consequence: employees, too, must be re-qualified. With the help of the “AmbiWise” system, partners in industry and research have introduced a new tool for mobile and cross-site knowledge management in assembly and maintenance. This allows for qualification measures to be integrated directly into work processes.

“AmbiWise” is easy to use and thus makes it easy for employees to contribute their own knowledge. Five partners were involved in the project: Infoman, the Research Department for Innovative Factory Systems of the German Research Center for Artificial Intelligence (DFKI), Beuth University of Applied Sciences in Berlin, Semantic Edge and the Institute for Technology and Labor (ITA). The project was sponsored by the German Federal Ministry of Education and Research with a total of 3.1 million Euro over three years, from 2014 to 2016.

The “AmbiWise” assistance and collaboration system stands for mobile, context-sensitive user interfaces for an optimized knowledge transfer for everyday use. It permits a mobile and cross-site knowledge exchange at the company. With its help, knowledge can be recorded, updated and enriched with multimedia learning contents directly at the workplace.

Thanks to QRCodes, iBeacons or language, workers can call up the learning contents intuitively and within the context of the production or assembly station. By means of diagrams, videos or instructions by an augmented reality, new employees are trained and the knowledge of existing personnel is refreshed.

„Production and assembly at modern companies is becoming increasingly complex. Through “AmbiWise”, we replace standard instructions and enable employees to create specific descriptions for machines and work steps,” explains Fabian Quint, Project Manager for the German Research Center for Artificial Intelligence. Thus, employees pass on their knowledge not only within the team but, thanks to digitalization, content can be used across sites as well. Departing employees can document their knowledge based on experience and new employees can be familiarized with their jobs more easily.

The user interface of “AmbiWise” is based on the HTML5, CSS3 and Javascript web technologies. The system is compatible with the majority of mobile and stationary end devices. The contents are arranged as a tree structure where the highest level consists of stations to which tasks and work steps can be attributed. Work steps can be filed as ordinary text or be described with multimedia contents like illustrations, videos and augmented reality instructions. A recording of these contents can be made and attributed to a task at any location.

Among other things, smart glasses are used for the video recording. Thanks to the first person perspective, they are superior to the recordings on other recording devices such as tablets. Before the contents are visible in the system, they must pass through a multi-step release process. In this process, the master craftsman for example, or the works council representative and data protection officer can be involved.

The “AmbiWise” system was tested in the production setting at five sites of two application partners. The pilot application also included the creation of learning videos by means of smart glasses. The learning videos at Daimler AG showed the execution of the work including supplementing information from the perspective of an experienced assembly staff member. The learning videos were recorded under real work conditions and represent self-contained, short learning units. Employees at Schaeffler GmbH & Co. KG additionally had the chance to evaluate the recorded videos, add contents and give feedback. This helps continuously improve the system and its contents and keep them up to date. After a 15-minute instruction, the users were able to work with the system productively.

“Since “AmbiWise” is basically self-explanatory, we see a viable basis for the future to prepare knowledge at production sites in a form that is suitable in practice and to support the knowledge transfer on the shop floor,” Quint summarizes. “AmbiWise” is currently being presented in the demonstration center of Technologie-Initiative SmartFactory KL e.V..

The Technologie-Initiative SmartFactory KL e.V., founded in 2005 as a non-profit association, is an Industrie 4.0 network of industrial and research partners who jointly carry out projects regarding the factory of the future. SmartFactoryKL is a manufacturer-independent demonstration and research platform which is unique in the world. Here, innovative information and communications technologies and their application are tested and developed in a realistic, industrial production environment. The technology initiative, supported by the active participation of its members, has already established pragmatic solutions, first products and common standards. SmartFactoryKL intensively cooperates with the German Research Center for Artificial Intelligence (DFKI) in Kaiserslautern and was appointed Mittelstand 4.0-Kompetenzzentrum Kaiserslautern (SME 4.0 Competence Center) by the German Federal Ministry for Economic Affairs and Energy in 2016.